Home All The News Pennant: I scored Arsenal hat-trick with vodka in my stomach 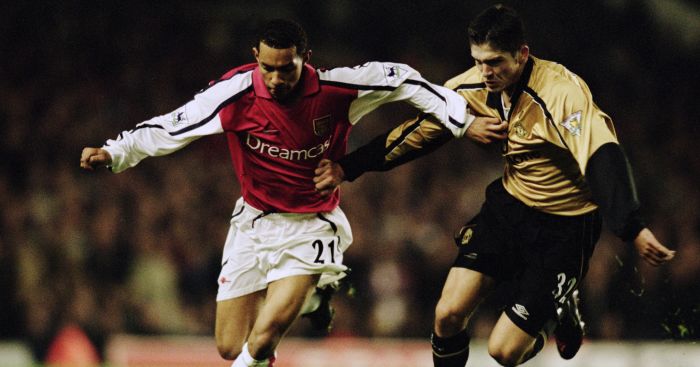 Jermaine Pennant admits you could still smell vodka on his breath from a night out during his full Premier League debut for Arsenal.

The former winger plundered a hat-trick inside the first ten minutes of his full top-flight debut against Southampton alongside the likes of Thierry Henry and Patrick Vieira.

The Gunners had already conceded the title race to Manchester United and with an FA Cup final against Southampton in ten days, Arsene Wenger handed Pennant a chance against the same opponent.

They won 6-1 at home to the Saints but Pennant surprised himself after attending a FHM party until 6am that morning.

“I’d been out the night before and had a big night, because I really didn’t think I would be playing, never mind starting the gam,” Pennant told FourFourTwo magazine.

“I’d never started a game for Arsenal and I didn’t think that’d change, especially as Robert Pires, Freddie Ljungberg and Ray Parlour were all in the squad. I was guaranteed to be on the bench.

“I thought, ‘Sod it’, went to an FHM party and got home at around 6am. I couldn’t believe it when I saw my name in the starting line-up! I was still so hungover when I was playing; I just did everything in my power not to embarrass myself.

“I can’t believe I scored. It was just a huge relief – I thought, ‘OK, you can take me off now. Please, Arsene!’ I felt so sick and I could feel the vodka still bouncing around in my stomach. You could smell it on my breath, too.

“I did OK to score a hat-trick: it shows I had talent, though it helps when you’re playing with Thierry Henry and Patrick Vieira. That was the first game of Arsenal’s 49-game unbeaten run.”