The change from the People's Game to the game without people has been seamless. 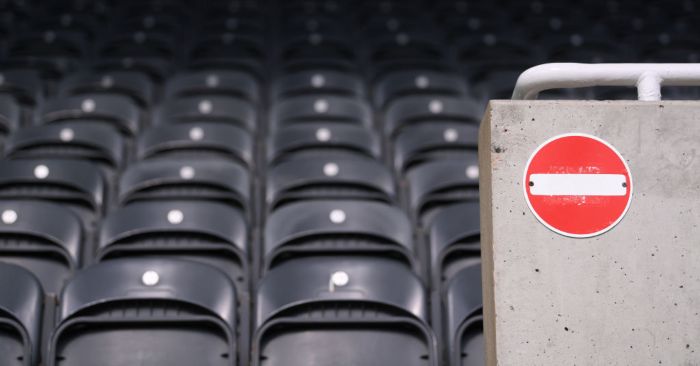 The change from the People’s Game to the game without people has been seamless. Are fans even needed at football anymore?

I was listening to 5 Live’s coverage of the Champions League games this week and, as ever, the commentators were doing a very good job at describing the action, managing to create tension and release, with excitement and passion in their voices. There was plenty of football discussion, as per usual. All felt as it always used to feel.

There are adverts on talkSPORT telling me the football is back and that it’s time to be Gamble Aware again. Programmes are interrupted for the odds on various games and outcomes. All very normal.

I watched some clips and highlights of games and saw players celebrating goals in the exact same way as they normally do, joyous and with arms aloft in front of no-one, as if it was a packed ground.

And every day of the week I’ve listened to my usual raft of podcasts and read newspaper pieces all talking about the games: who played well, who didn’t, what tactics were deployed and how managers had reacted. Same as it ever was.

The sports pages are, as usual, full of stories about transfers and loans, with the richest spending millions to leverage their financial advantage over the rest to an even greater degree than usual. Fans of clubs are busy bitching and moaning at each other in the usual way. The football-as-shopping addicts are out in force demanding their club buy players because that’s all they’re interested in.

Managers are getting sacked and replacements installed, also as per normal. Players are being paid in full and all the games are being broadcast on television, as they always are.

Premier League and European football have been going on without us being present. Are we being missed by anyone? No, we are not. There is occasional talk about how nice it’d be if there were fans to see the big play-off games or cup final, in the same way it’d be nice to have some tomato sauce on your chips, but it’s far from necessary: the meal will be eaten and enjoyed without it.

These are, in any case, minority voices, and it is starting to feel so much like lip service because everyone is having a great time regardless. In real and practical terms, pretty much everything is happening as it always happens, albeit with tweaks to the European tournament organisation.

The media is charged with covering the games and without any games, they’d be unemployed. As such, football is probably more important to them than it is to us. Many people have already got out of the habit of football and are finding other things to do, but reporters and commentators owe their living to it. No wonder they’re going on like everything is normal.

And I’m sure you’ve read and listened to football observers who are now saying they’ve been enjoying the games on TV regardless of lack of crowds, perhaps fancying themselves as football aesthetes and students, merely studying the art of the game. I’ve even heard some say it is a purer version of the sport and they actually prefer it. Some may add a caveat that of course football isn’t as good without fans, but to be honest, I’m starting to disbelieve them, or wondering if they’re lying to themselves. People like it like this, or at the very least, have easily adjusted to it and when the whole of the football media is ‘doing’ football as normal like this, well, it becomes normal.

I spoke to my secret Premier League player this weekend. I’ve talked to him a few times across lockdown and he’s told me that he is actually now enjoying playing, that it’s less pressure, and says while it doesn’t quite get the blood pumping without thousands roaring you on, “it’s still football and I like playing football.

“You just go on autopilot and play. It’s all we’ve ever done, so it comes easy. If we always played like this, it wouldn’t bother me at all,” he said.

Considering it is supposed to be a football crisis, It doesn’t look much like a crisis for the top flight or its clubs, does it? It is for the non-playing staff who’ve been laid off and lower down the pyramid it clearly is, perhaps for many, a terminal crisis. But in the Premier League, it just isn’t.

Remember when Burnley were said to only have four months of money left? They’re still around. Is any Premier League club on the verge of bankruptcy? Nope.

Remember when clubs furloughed staff because they might go bust without TV money and matchday income and then unfurloughed them because it looked bad (except for Mike Ashley at Newcastle, who already looked bad and so didn’t care)? Have any collapsed? No.

Remember how clubs wanted players to take a wage cut or deferral to help them survive and the PFA kicked back and said you can whistle for that, pal, the billionaire club owners can afford to keep paying our wages and in full, thank you very much? Well it turns out the PFA were right. Owners could. And they have (though the PFA’s attitude to wage caps will choke the life out of lower-league football). No-one has gone unpaid. Very few took a cut or deferral.

It is starting to feel like the last five months have all been one big Premier League charade or deception. There has been a lot of crying wolf; there must have been because, look, here it all is once more, virtually unchanged. The new season’s fixtures will be out in a couple of weeks, just a month late, and off we go again, still crowdless.

Remember when #playerstogether was formed? How we all applauded their generosity for donating a reported £4million to NHS charities and sticking it right up the bracket of that serial truth-distorter, Matt Hancock? It was popular and it put to bed the uncomfortable feeling that footballers were accruing vast wealth while not even playing, at a time of a national crisis, when the country was being held together by virtue of the graft of some of the lowest paid in society. Once the £4million donation was announced, that rather inconvenient, awkward, conscience tweaking matter was never mentioned again.

While that 0.13% doesn’t represent the entirety of what every single Premier League player might donate to charity – of course it doesn’t – that’s not the point. #playerstogether was sold to us by football media and by the game itself as A Generous Thing To Be Admired. If your 9p per day donation was painted that way, would it be a fair judgement, or is this another deception? In the same way clubs were not especially skint, #playerstogether wasn’t that especially generous.

When it comes to the Premier League, the paying fan, now unable to attend, has been very quickly disenfranchised and pushed to the media margins as less important than, well, absolutely everything else. The pretence has dropped. We already knew that financially; fans could be let in for free and clubs would barely suffer any financial distress. We knew that if Newcastle United hadn’t bought Joelinton and had played to an empty stadium for a season they’d have been £16 million better off. We knew that Bournemouth took £5million per season from fans and £130million typically from the Premier League.

Fans haven’t been financially important for years, and now, they have been made entirely superfluous. Premier League football really doesn’t need us. It’s ended the love affair, filed for divorce and is seeing other people. The in-ground supporter as a concept has been effortlessly bypassed. Players are being paid, they’re playing football and loving it, their life is normal or better. TV and radio are all working fine; the papers are full of football. Everyone is happy.

The clubs are not missing our money much, the TV companies are still coughing up to show the games, so who needs the dirty, grunting public? Without us clubs don’t have to pay for policing and they can lay off all those matchday staff and give the money to players instead.

Plans are in place to play a whole season this way, or at best to radically diminished crowd numbers, but to hear and see the Premier League, its propagandists and promoters, to hear and see all of football media, we will barely notice any difference, so complete has the change been from the People’s Game to the game without people. If they could make the crowd noise more responsive to the action – and they will – the wholesale disposal of fans will be complete. Will anyone even notice?

Perhaps we should just not bother going to Premier League games ever again, even when allowed to. Clearly, they have no need for us. Clearly, they’re all happy without us being there and happier still if we just pay to watch on TV.

Our gate money and attention will be far more appreciated and is much more needed lower down the pyramid. Let the elite play with themselves for themselves and for the media which depends on them, while we go back into the real world and watch football played by people who do really need our support. The Premier League has told us it doesn’t love us, doesn’t need us and will get on without us. Fair enough. We never loved you anyway.