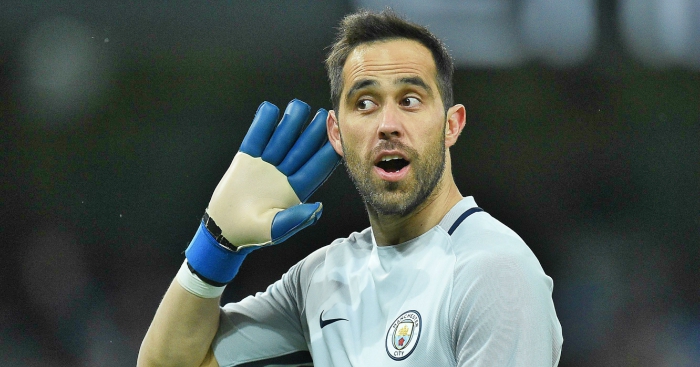 Pep Guardiola lavished praise on Sergio Aguero and defended Claudio Bravo after Manchester City came from behind to thrash Huddersfield in the FA Cup.

Top scorer Aguero struck twice, set up another and hit the woodwork as City powered into the quarter-finals with a 5-1 victory over the Sky Bet Championship side at the Etihad Stadium.

But it was another dismal night for much-maligned goalkeeper Bravo who, on his return to the team after sitting out five of the previous six games, was at fault for the Terriers’ surprise early opener.

The Chilean allowed a seventh-minute shot from former City youngster Harry Bunn to slip under his body in an awkward moment which also turned up the heat on Guardiola, the manager who has backed him.

To compound their woes, Bravo was later taunted by his own fans with a sarcastic round of applause after making a save.

Guardiola needed his team to respond to take off the pressure and they did so in style with three goals before the interval. Leroy Sane equalised before Aguero struck from the penalty spot and teed up the third for Pablo Zabaleta. Aguero and substitute Kelechi Iheanacho completed the job late on.

Aguero’s double, coming after he also scored two against Monaco last week, took his tally for the season to 22 and underlined his return to form after recently losing his place to Gabriel Jesus.

“It is the best performance I have ever seen from Sergio in many things,” said Guardiola, who has repeatedly played down speculation Aguero could leave the club in the summer.

“When he plays in that level Sergio is unstoppable. We are so so happy the way he played.”

Guardiola also tried to talk up the performance of Bravo even though the 33-year-old again did little to convince.

Bravo has struggled to make an impact since controversially replacing Joe Hart earlier in the season and has recently been dropped in favour of Willy Caballero.

Guardiola said: “The performance from Claudio was amazing. I just congratulate him on how he played.”

Guardiola also claimed Bravo would not be affected by the reaction of the crowd towards him.

He said: “He is strong enough. This year he was nominated as one of the five best goalkeepers in the world.

“What the fans express – I am not here to judge them.”