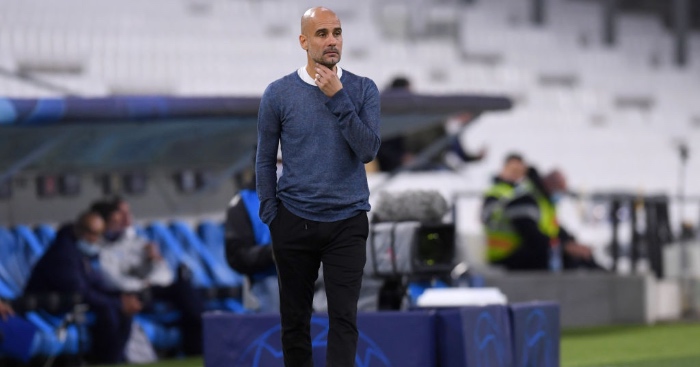 Man City boss Pep Guardiola is satisfied with his team’s ‘patient and aggressive’ performance as they beat Marseille in the Champions League.

They went ahead in the first half thanks to a goal from recent signing Ferran Torres.

Midfielder Ilkay Gündoğan doubled their lead in the 76th-minute after being set up by Englishman Raheem Sterling.

Sterling then grabbed himself a goal in the 81st-minute as City took control of their Champions League group.

Speaking about the performance, Guardiola told reporters: “We played really well, we didn’t concede much and we were in control, patient and aggressive without the ball. I’m so satisfied with the performance and result, it’s always difficult to win away.

“We can play on both sides, we tried to play high and wide to stretch the pitch. Raheem Sterling was exceptional, Phil [Foden] as well.

“We were so stable defensively. Aymeric [Laporte] was good, Kyle [Walker] is in the best form since we’ve been together, Oleksandr [Zinchenko] helped us, John [Stones] played good minutes. I’m so satisfied with the way we played.”

City have faced criticism in recent months, but Guardiola is remaining positive about his side: “We have to accept the criticism. We play every three days, when you win it’s good but if you don’t people want to destroy everything. But it’s about the chairman and everyone else understanding.

“Part of the criticism was right, but you’ve got to accept it. It’s part of our job. It’s about where we’ve come from in the last month, with lack of preparation, injuries and Covid-19 but the Champions League is in a good place now. I’m sure we’re going to find that consistency.”

City’s next fixture is against Sheff Utd in the Premier League on Saturday.