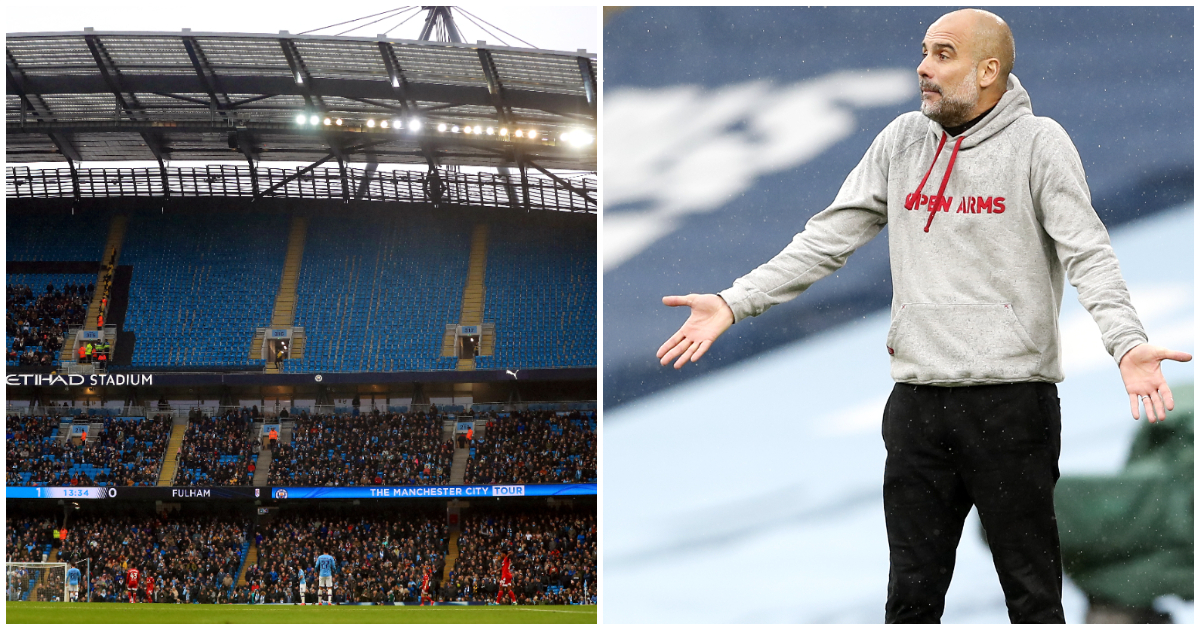 Pep Guardiola has caused a stir by pleading for Manchester City fans to turn up at the Etihad when the champions host Southampton on Saturday afternoon.

“I would like more people to come to the next game on Saturday,” Guardiola told BT Sport after the 6-3 victory over RB Leipzig on Wednesday, which attracted a crowd of 38,062 to the Etihad Stadium.

Ian King reckons Guardiola’s comments highlight the disconnect between those in the game and the supporters who have to find the money for match tickets and the time to attend.

Kevin Parker, the general secretary of City’s official supporters’ club, also feels Pep was out of line to publicly question the loyalty of fans. “To question the support, which is effectively what he is doing, is disappointing and uncalled for,” he said while suggesting Guardiola sticks to coaching his team.

For Guardiola, it is not the the first time he has seemingly questioned the City fanbase.

In January 2020, after City had beaten Championship side Fulham 4-0 in the FA Cup fourth round in front of 39,223 supporters, Guardiola criticised supporters for not filling the stadium.

“Hopefully in the next game against United, our fans can come and make the stadium full. It was not full. I don’t know why. Hopefully they will support us more.”

That criticism didn’t go down well with City fans, which prompted this non-apology two days later.

“It was never my intention to offend the fans. From day one until the last one here what I want is to fight and play as good as possible to see the Etihad Stadium full every single game. Maybe it was my mistake that I thought Sunday at 1pm would be full.”

Guardiola’s comments on Tuesday came almost five years to the day since he first questioned the City support.

On that occasion, in September 2016, 30,270 turned up to boo the Champions League anthem and see City batter Borussia Monchengladbach 4-0. The attendance was 25,000 shy of the Etihad’s 55,000 capacity. But the game had been rescheduled from the previous evening, when it was originally postponed because of heavy rain.

Still, Guardiola urged City fans to forget their grudge against UEFA to come and fill the stadium.

“I was not here for what happened but they must forget what happened in the past. All we can do is play every time better and people will say ‘I spend 90 minutes there and I have fun.’

“Today the stadium is not completely full so the only thing we can do is play good so the people at home say ‘wow next time I will be there’. We have to be so proud to play in this competition. In coming here in three or four weeks are coming the best football players ever with Luis Suarez, Neymar and Barcelona and we have to enjoy it. The people are listening so I am sure they are going to do that.

“Our players deserve the stadium completely full and hopefully against Barcelona and Celtic it is going to happen.”

By October 2018, Guardiola still didn’t feel the backing of City fans while he was toiling to win them the Champions League.

Before a group match away at Shakhtar Donetsk, the manager urged the fans to do their bit.

“We have to be pushed by everyone surrounding Manchester City that we have to win it – and we still don’t have that feeling from the fans.

“I feel we’re a really good team but you still need something special to win the Champions League and still I don’t feel it. But every year we’ll get closer and, sooner or later, it’s going to happen.”