Home All The News I am not Guardiola’s mentor, insists Leeds boss Bielsa 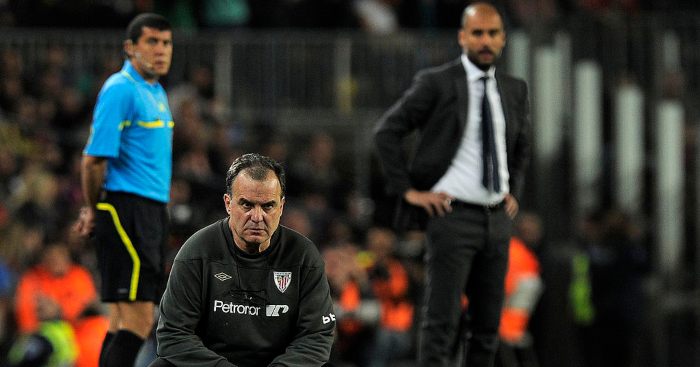 Leeds boss Marcelo Bielsa insisted he was not Pep Guardiola’s mentor before the two managers go head-to-head on Saturday for the first time in the Premier League.

Leeds face Manchester City at Elland Road in a game being billed as ‘master versus pupil’, but Bielsa is adamant his good friend Guardiola has always been his own man.

“I do not feel like a mentor to Guardiola. It’s not just how I feel, it has been evidenced to not being the case,” Bielsa said.

“If there’s a manager who is independent in his own ideas, that is Guardiola. It’s not just because I say it is, it’s because his teams play like no other team.”

Guardiola has repeatedly described Bielsa as the best coach in the world after their friendship was cemented in 2006 when the Spaniard travelled to meet the former Argentina coach on his ranch near Rosario.

They crossed swords in LaLiga during the 2011-12 season when Bielsa was in charge of Athletic Bilbao and Guardiola in his final campaign as head coach at Barcelona.

Bielsa’s Bilbao drew the home game with Barca 2-2 and lost 2-0 at the Nou Camp.

“The memories I have (of Guardiola’s Barcelona) are they managed to neutralise our attempt to impose ourselves,” Bielsa said.

“Anyone who faced Barcelona in those four years will give you the same answer. Many believe that is the best club team ever created.”

Back-to-back wins against Fulham and Sheffield United have lifted Leeds to seventh in the table after their opening-day defeat at Liverpool.

City, who won at Wolves on the opening day, sit 13th and Guardiola criticised his players after last Sunday’s shock 5-2 home defeat to Leicester.

Only #LCFC have a higher such ratio so far in the @premierleague. 🔥 #PL #MOT pic.twitter.com/yQUdQkF68k

It was the first time one of Guardiola’s teams had conceded five goals in his managerial career and questions have been raised of City’s title credentials.

“I never find it comfortable to talk about an opponent’s weaknesses,” Bielsa said of Saturday’s opponents.

“The season is very short and it’s hard to make conclusions as to whether they are weaker than before. To talk about an opponent’s weakness in public is never a comfortable thing.”

Leeds have refused to comment on reports since Bielsa’s press conference that their bid to sign midfielder Michael Cuisance from Bayern Munich had fallen through.

When asked about the France Under-20 international, who had been expected to complete a move this week, Bielsa said:  “I would prefer to talk about him when he is officially our player.”