Home F365 Says Trailing this Liverpool side makes nobody a fraud… 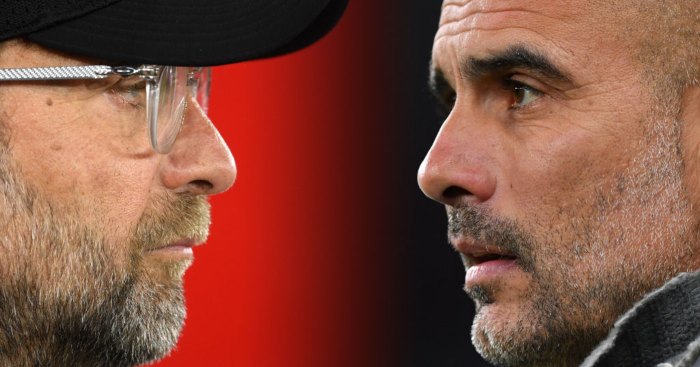 Of course Stan Collymore believes that Pep Guardiola should be castigated. Of course he does. He writes that ‘if any other boss was 22 points behind the leaders after 25 games of a title defence they would be right under the cosh’ and blames the sycophancy of the media and pundits and their unwillingness to ‘backpedal’ on Guardiola. Because of course the sensible reaction to a failed title challenge – and it is a failed title challenge – from a double Premier League winner is to loudly question his credentials and call for his defenestration.

For some there are only winners and losers (some may even turn that idea into a brand) and if you’re not winning (Liverpool) then you really must be losing (everybody else). To those people, Guardiola and Klopp must be infuriating, talking sensibly about progress, processes and perspective, while giving credit to the triumphant opposition like adults. They admire each other, respect each other and absolutely know that the team finishing second in this particular battle is no ‘loser’, whatever the points gap.

What Klopp has achieved with Liverpool is extraordinary – even without the very real prospect of invincibility – but that does not automatically mean that everybody trailing in their wake has endured a disastrous season. Some have, certainly, but City’s season so far probably deserves a B- grade rather than an F. They are still in every knock-out competition – including a final they are odds-on to win – and they sit second in the Premier League (in which they are the top scorers); the only semblance of real failure is in those points totals, but they can only be held truly accountable for their own.

By that measure they have undoubtedly gone backwards, picking up eight fewer points from this stage last season. But if they had matched that performance, enough to win the title last season, they would still be rank outsiders for the title because Liverpool would still be extraordinary. Those who only want to see winners and losers seem to easily forget that there is only one Premier League title up for grabs each season. Coming second makes Guardiola no more of a fraud than Sir Alex Ferguson, whose Manchester United side trailed two places behind’s Arsenal Invincibles in 2003/04 with a points total that had won them the title seven years before.

Manchester United are currently 13 points behind last season’s 25-game total and yet a top-four finish will be counted as a roaring success for Ole Gunnar Solskjaer; Frank Lampard’s Chelsea are nine points shy of Maurizio Sarri’s Chelsea and yet media criticism has been scant. Guardiola has far more credit in the bank than either of those coaches – and is far, far more likely to win other silverware – so it’s little wonder that pundits are reluctant to ‘back-pedal’ on their admiration.

That is not to say that Guardiola has not made mistakes this season; he must take a large slice of the blame for City’s defensive issues after failing to replace Vincent Kompany and persisting with a Fernandinho experiment that left them vulnerable in midfield, while his tendency to over-strategise big games is infuriating even to a neutral. But City could not have kept pace with this Liverpool juggernaut hitting their astonishing peak. Whether City are 15 or 22 points adrift now makes zero difference.

Will people question Klopp if he fails to match those extraordinary heights next season, because it’s close to inevitable that he will. Or will he be allowed a fallow year – as he absolutely should – after the triumphs of the last two seasons? Those looking for a Liverpool dynasty should beware. And City will undoubtedly improve with inevitable investment.

Indeed. Whichever wag said that second place is the first loser had clearly not tried to take on Jurgen Klopp’s Liverpool in 2019/20.