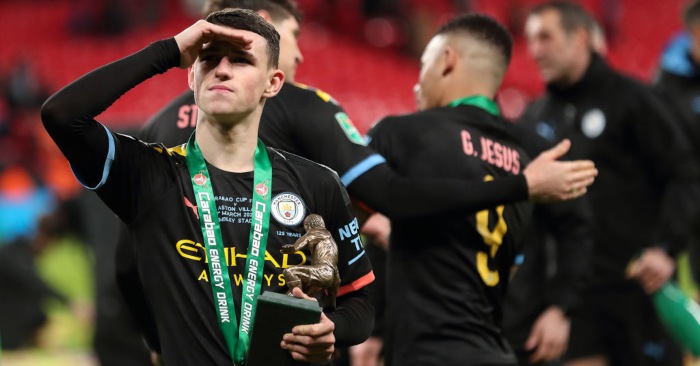 The 19-year-old impressed in Sunday’s Carabao Cup final victory over Aston Villa but has started only two Premier League games so far this season.

Speaking ahead of City’s FA Cup fifth-round tie against Sheffield Wednesday, Guardiola said of Foden: “I want the best for him and he will get what he deserves.

OPINION: Phil Foden and the inequality of Premier League minutes…

“I am delighted with his performance and behaviour. When you are 19 you have a lot to improve but with his behaviour he can achieve what he wants.”

On landing the Carabao Cup for a third year running, Guardiola added: “When they win a trophy they take a shower and then think about the next one.

“It is so nice what we have done in the last three years but tomorrow is another final.”

Guardiola says Sergio Aguero is fit after picking up a knock on Sunday.

Claudio Bravo is set to remain in goal for their latest cup tie, but forward Leroy Sane will not be involved despite enjoying a run-out for the Under-23s after overcoming a knee injury picked up during the Community Shield last August.

“After six months out it is a process,” Guardiola added. “He’s taking the normal steps to come back.”