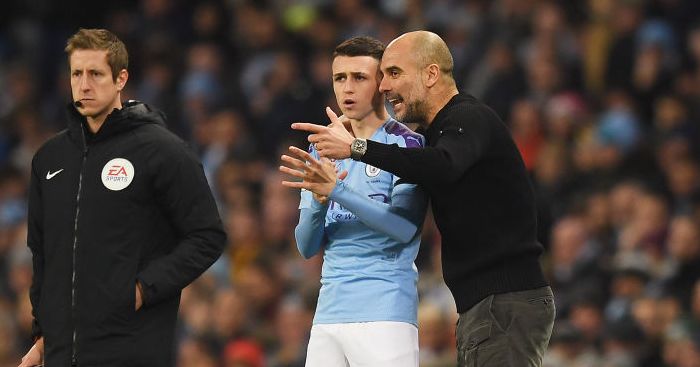 Pep Guardiola appears to have backtracked on his plans for Manchester City midfielder Phil Foden.

City are expected to make some changes for next term after a disappointing Premier League title challenge this time round.

Guardiola’s side, who began the campaign with hopes of winning a third successive league crown, trail current leaders Liverpool by 22 points.

They need just a couple of signings to bridge that gap, but Guardiola himself stated that Foden would take a more involved first-team role to replace the departing David Silva last month.

“David is going to leave this season and we are not going to buy any player in his position because we have Phil,” he said.

“We trust Phil. If we didn’t believe in him, we might go to the market to replace David, but we have Phil.”

The manager now suggests that Silva might have to be replaced externally.

“I don’t know. I have an idea but not even had contact from anyone in terms of that because, during the season, I am not too much ready to think about that,” he said.

“Of course we have to do something because David is leaving and in some positions we are going to do it, but I don’t know how many or how much because the market is always difficult and still there are two or three months, and two or three months can change a lot of things.

“There are incredible nice things still to fight for. We are in a final in two or three weeks to win one more title and we have the FA Cup, the league to try and finish second in and fight for qualification for the Champions League next season, and two big games against Real Madrid.”