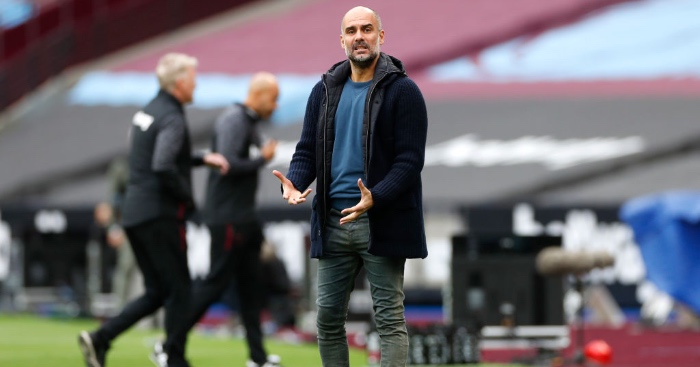 Man City manager Pep Guardiola believes his side ‘had the chances’ to score against West Ham but couldn’t do so after they drew 1-1.

City went into half time 1-0 down after an excellent goal by forward Michail Antonio.

The Englishman received the ball in the box and held off defender Ruben Dias. He put the chance away with a clever overhead kick.

City striker Sergio Aguero was subbed off at half time for Phil Foden. It’s believed that the Argentinian was removed after picking up an injury.

Foden was influential in the second half and helped City to look deadly going forward.

He scored in the 51st-minute with a well-taken goal after receiving the ball in the box from Joao Cancelo.

Speaking to BBC Sport after the match, Guardiola said: “We started really well. We suffered in the last 10 or 15 minutes of the first half. In the second half we were better and scored early. We had the chances we needed to win the game, but unfortunately we couldn’t score.

“We created enough. Their defenders were defending so deep so it’s difficult to find spaces, but we had the chances.

“I’m not a guy who can predict the future. We’ve already dropped seven points, which is a lot. But we’ve struggled a lot for many reasons. We have to take things game by game and see what happens.”

When asked about Aguero’s injury, the Spaniard replied: “It looks like a muscular injury.”

Guardiola was visibly frustrated after the match as his team failed to make the most of their dominance in the second half.

Raheem Sterling had two good chances to put City ahead. Some brilliant defending and goalkeeping from the Hammers kept them in it.

The result means West Ham continue their impressive start to the season. They’ve already beaten Wolves and Leicester in the league.

City’s next match is against Marseille in the Champions League on Tuesday.

West Ham face Liverpool next Saturday in the Premier League.