Home All The News Guardiola: Performance ‘worth more than result’ as Man City draw 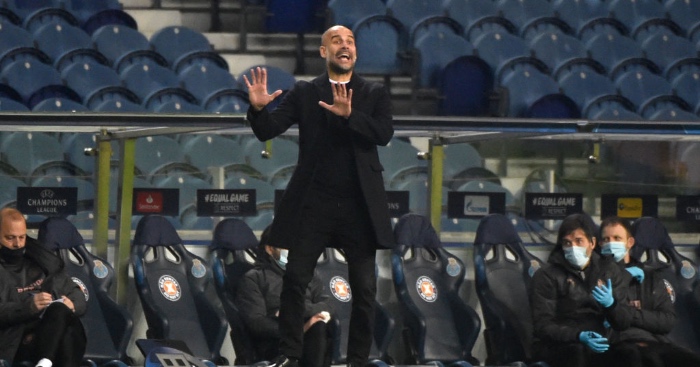 Man City boss Pep Guardiola thinks his team’s performance against Porto was ‘worth more than the result’ as they drew 0-0 in the Champions League.

He continued that form in the second half, but was unable to stop a Gabriel Jesus effort in the 80th-minute.

The Brazilian striker thought he had broken the deadlock late on, only for his goal to be ruled out.

City had more good chances late in the game, but it ultimately ended goalless.

Speaking after the match, Guardiola said: “Congratulations to my team for this game and finishing first. We played to win, we didn’t concede a shot on target or a corner all game.

“Alongside Benfica, Porto are one of the best teams in Portugal, very physical. We did really well but unfortunately couldn’t score, all the players were fantastic.

“We struggled to score today but we played really well with incredible personality. Many things about the game were brilliant.”

When asked about playmaker Phil Foden, the manager said: “What a player. His intensity, he always creates things and yes, he was so good.”

Speaking about the overall group stage performance, Guardiola said: “Absolutely very happy. It’s worth more than the results, we played really well in all the games. 11 shots on target against Olympiakos and against Marseille as well and today we had lots of chances. Maybe not as much today but enough to win. The way we played, the courage and in defence we were so good.”

The draw means City qualify as Group C winners and go through to the next round high in confidence. Their next match is against Fulham in the Premier League on Saturday.