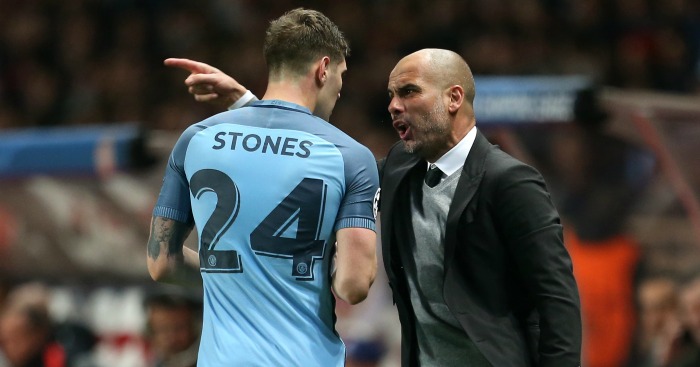 Stones’ future has been the subject of speculation because of a lack of regular action in the second half of City’s Premier League title-winning campaign.

Arsenal have been linked with the centre-half, who has fallen out of favour at the Etihad Stadium.

The 23-year-old lost his place after suffering a hamstring injury in November and has since had to deal with other fitness problems, as well as increased competition following the signing of Aymeric Laporte.

Yet his early-season performances were impressive and Guardiola is happy with his progress, saying reports he could leave the Etihad Stadium are wide of the mark.

“I’m not going to comment on the transfers when it’s fake news,” said Guardiola. “I don’t know how people believe we’re going to sell John Stones.

“He is a young player, an international English player. He’s a huge part of the reason why we won the title.

“The first six months he was amazing but, after going to national team twice, he came back injured. After that, he handled the situation.

“Vinnie (Kompany) came back at a good level, Nico (Otamendi) has been at an amazing level all the season, and Laporte – his impact from the beginning was so, so good. All four know they have to compete between them.

“John is not going to move. I don’t know how long I will be here in Manchester but, as long as I’m here, John Stones will be with us.

Stones has been sidelined in recent weeks with an adductor problem that also seems likely to rule him out of Sunday’s trip to West Ham.

After that City will have just three competitive games remaining for Stones to prove his fitness for the World Cup, but Guardiola has no doubts about his ability.

He said: “We cannot forget the first six months with Nico, he was excellent.

“But John Stones is going to stay here with us. I’m sorry for the guys who announce we’re going to want to sell him. I’m sorry, they lie.”

Guardiola also rubbished any suggestions City may have had a chance of signing veteran Barcelona midfielder Andres Iniesta, who announced on Friday he will be leaving the Nou Camp at the end of the season. He is expected to move to China.

Former Barca boss Guardiola said: “I’m not going to promote the fake news. He decides his own future and he has decided to go to China and play there and he’s going to finish there.”