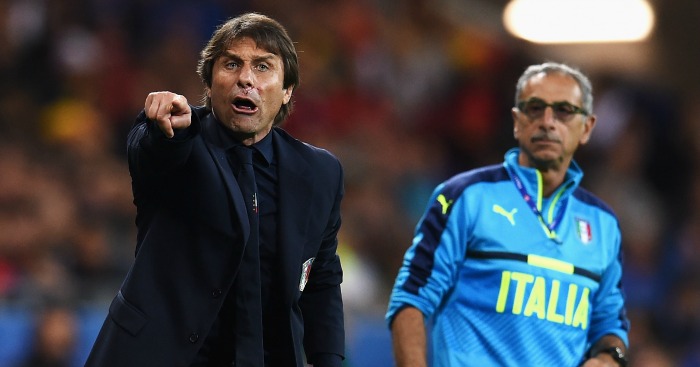 A manager with a CV as impressive as Antonio Conte’s rarely needs to audition, but the incoming Chelsea coach has largely been ignored by the Premier League spotlight since his appointment was confirmed at the start of April. With Jose Mourinho and Pep Guardiola hogging headlines and column inches in Manchester, Conte has been the feuding duo’s third wheel, quietly focusing on Italy’s preparations for Euro 2016. If a reminder was needed of his ability to restore Chelsea as a force next season, the Azzurri’s impressive display on Monday should suffice.

This was supposed to be Belgium’s big night, the moment they finally proved what all the fuss is about. As the heavens opened outside the Parc Olympique Lyonnais before kick-off, fans jostled for shelter, one group inexplicably appropriating a portaloo door and proudly holding it aloft above their heads. Most had to submit to a soaking, but beneath the sodden Fellaini wigs, limp Nainggolan mohawks and smeared tricolour face paint, the Belgians were still smiling.

They had every reason to be optimistic. The number two ranked team in the world and number one in Europe, Marc Wilmots’ squad boasts some remarkable talent regardless of a raft of defensive injuries which have deprived them of captain Vincent Kompany. One of the leading criticisms of Wilmots has been his failure to find the right formula, both before and after the World Cup, but few managers at the tournament are this spoilt for choice. “We’re very confident. We have some fantastic players,” said a Belgian fan as we made our way into the stadium, before hesitating when asked for a prediction. “I think we will win 2-1.”

Despite his supposed confidence it was hardly said with conviction, and those creeping doubts were echoed on the pitch when the match began an hour later. The sprightly young contender to Italy’s battle-hardened veteran, Belgium’s task was clear: they would have to break their opponent down through sustained pressure. It was going to be a long night, and one they didn’t appear prepared for either tactically or mentally. Although Italy have been widely written off after an underwhelming qualifying campaign and a group stage exit alongside England in 2014, they are far too canny a side to be naively exposed by the first wave of red shirts.

Belgium probed to find a way through in the opening stages and a smart passing move ended with Radja Nainggolan stinging the palms of Gianluigi Buffon. This was to be the pattern of the first half; Belgium would win the ball and advance with purpose before being restricted to a speculative effort from outside the box. “Italy specifically played on the counter-attack,” Wilmots complained later. “They did not play real football and when faced with everyone sitting back, it becomes difficult.” It is the oldest trick in the book at international tournaments, and one Wilmots should have been ready for.

In contrast to the Belgian coach, Conte’s plans began to bear fruit as the game opened up. Those who know the former Juventus manager, who broke record after record with the Old Lady as he led them to three successive Serie A titles, talk of an obsessive attention to detail to rival even Mourinho. That was very much on display in Lyon, with a grizzled back four borrowed from Juventus (including Buffon) suffocating Belgium’s attacks, and wing-backs Matteo Darmian and Antonio Candreva breaking readily to cause problems down the other end of the pitch.

Italy are not the force they once were or possibly could be – a starting line-up with an average age of 31 will attest to that, along with Marco Verratti’s absence through injury – but with speed in thought and deed they began to find gaps in Belgium’s defence. On paper, they surely lacked the pace to provide any real threat on the counter, but each player was so finely attuned to his position that a quick combination of passes would see Darmian or Candreva released, with Graziano Pellè enough of a lump to aim at in the box.

On a list of things Belgium definitely didn’t want to do, concede first was sitting right at the top, circled and underlined twice for emphasis. That’s exactly what happened just half an hour in, when Leonardo Bonucci picked a pass Andrea Pirlo would have been proud of to find Emanuele Giaccherini unmarked in the box. The midfielder lost his place in the Italy squad for the World Cup after joining Sunderland in 2013, but he made up for lost time here with a cool finish past Thibaut Courtois.

The Belgium fans have travelled across the border in their thousands, taking over Lyon and filling two-thirds of the stadium in a sea of red. They made their voices heard on the hour mark as Wilmots’ decision to replace Nainggolan – a reported target for Conte at Chelsea – was greeted with jeers and whistles. Romelu Lukaku’s withdrawal for the disappointing Divock Origi brought the same response. On the pitch the players traded anxious glances, Jan Vertonghen at one stage booting the ball in frustration as he yelled at his team-mates.

Italy, on the other hand, continued to apply their experience of these occasions, remaining resolute in defence and looking for chances to kill off their opponent. That eventually came in the last minute as Candreva crossed for Pelle to blast home: cue wild celebrations with the entire bench emptying on to the pitch and Buffon sprinting the length of the field at the final whistle to share the moment with the supporters.

It should encourage Chelsea fans to see what Conte can achieve through his tactical acumen and organisation rather than a host of star names. To an extent a similar theme may play out at Stamford Bridge next season: Chelsea will probably lack the elite talent Pep Guardiola is planning to assemble at Manchester City – which has already started with Ilkay Gundogan – or that Jose Mourinho will no doubt pursue at Manchester United in possibly another £250m splurge, but Italy’s performance provides timely evidence to suggest such riches might not be necessary. Had they been able to call on Eden Hazard, it’s likely the result would have been even more comfortable.

Of course, Italy won their first match at the World Cup against England and were still eliminated in the group stage. But Conte can call upon the pragmatism that Cesare Prandelli lacked in costly defeats to Costa Rica and Uruguay. This is his only chance of glory with Italy, with the president of the Italian FA, Carlo Tavecchio, remarking that Conte “misses the smell of the grass” when his post-Euro 2016 departure was confirmed. The way in which he masterminded Belgium’s downfall should leave Premier League fans rubbing their hands in excitement. This third wheel knows how to upset his rivals in the battle at the top next season.