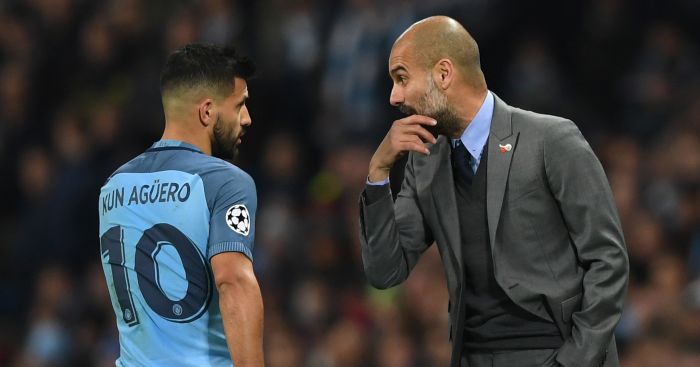 Pep Guardiola has denied he and Sergio Aguero have been discussing the player’s future at Manchester City.

The City manager was spotted dining with the club’s top scorer and his representative in Manchester city centre on Thursday night.

Guardiola insists the meeting was not to speak about contracts.

The former Barcelona boss has been questioned about Aguero’s future on a number of occasions this season due to a perception he may not fit into his plans.

Guardiola has always denied there is an issue and said the 28-year-old, who has scored 18 goals this season and 154 since joining the club in 2011, will only leave at a time of his own choosing.

He said: “We didn’t speak about the contract. He has already a long contract here. He has a lot of money and wanted to invite his coach to have dinner. That is what it is.”

Aguero signed a five-year contract in 2014. There was speculation he had agreed a one-year extension last summer but this has never been confirmed by the club.

Guardiola, who was speaking at a press conference to preview Saturday’s Premier League game against Tottenham, was also asked about the form of goalkeeper Claudio Bravo.

The Chilean, controversially signed as replacement for England number one Joe Hart earlier this season, has been criticised for his poor form.

The 33-year-old did not make a single save in last week’s 4-0 defeat at Goodison Park, with City conceding each time Everton had a shot on target.

On the subject of the keeper’s negative press, Guardiola said: “We accept it. It is part of our job – the manager’s job, the players’ job – so accept it.”

When asked how he could get the best out of Bravo, Guardiola spoke in general terms.

In what was an awkward exchange, when asked whether he expected more from Bravo, Guardiola replied: “From myself too.”

On the positive side, the signing of Brazil striker Gabriel Jesus was completed this week and the player will be eligible to play against Spurs at the Etihad Stadium.

Guardiola said: “He is fit, he is ready to be involved in the squad, in the team. He is a young player, 19 years old, so we cannot think he is going to solve our problems but he is going to help us in the Premier League.

“It would have been easier if he could have arrived at the beginning of the season, now is the middle of the season with not too many training sessions, but he is smart and has quality.”