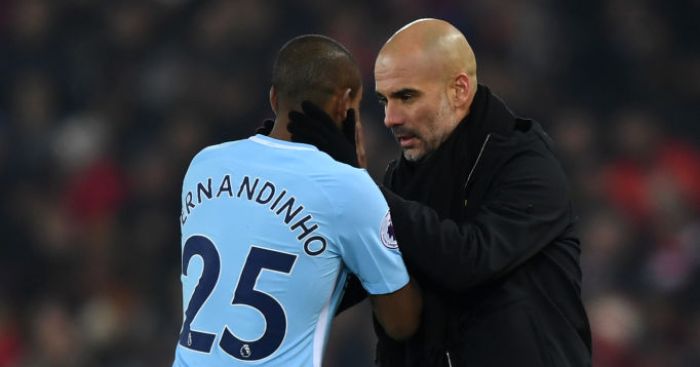 Pep Guardiola paid tribute to Manchester City midfielders Fernandinho and Rodri after they kept a clean sheet in defence to help the Premier League champions win 2-0 at Crystal Palace.

With John Stones recently back from injury and only able to take a place on the bench and Nicolas Otamendi absent after suffering a knock while on international duty with Argentina, City were left short of options at centre-back.

That meant it was left to Rodri to drop back alongside fellow midfielder Fernandinho into the heart of City’s defence at Selhurst Park, where first-half goals from Gabriel Jesus and David Silva saw them move to within five points of leaders Liverpool, albeit having played a game more.

“We had a lot of chances, unfortunately we cannot convert more, but it’s OK, we have next time,” Guardiola said.

“Nico had a big kick in the international with Argentina and in training yesterday I decided and thought about it.

“It’s a long season and we are going to use alternatives. John is now back, but he didn’t play for a long time.

“I thank them (Fernandinho and Rodri) both so much because it is not easy to play different positions with strikers like Crystal Palace have in Wilfried Zaha and Jordan Ayew and Christian Benteke. They did really well.”