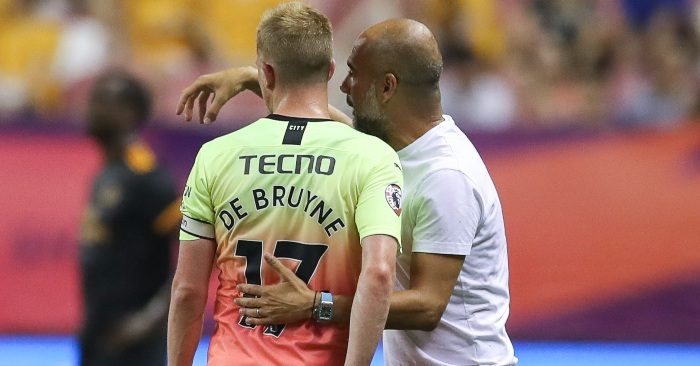 Raheem Sterling blazed over from 12 yards in normal time and City players then saw three penalties saved as they were beaten by Wolves in a shoot-out in Shanghai.

Ilkay Gundogan, David Silva and Lukas Nmecha all failed to beat Rui Patricio from the spot as Wolves prevailed 3-2 to claim the trophy in a poor-quality shoot-out at the Hongkou Stadium.

After sweeping almost all before them to win a domestic treble last season, it seems the Premier League champions have at least one area to brush up on.

City boss Guardiola said: “We didn’t expect that. I see my players take a penalty and I am always looking forward to scoring a goal but we have to practice. We’re going to practice to be better takers next time.”

That aside, defeat in unfamiliar hot and humid conditions after a week of travel difficulties was hardly a major setback for City.

There were positives, not least in the first-half performance of Kevin De Bruyne, who looked in great touch as he bids to put the injury frustrations of the past year behind him.

“He’s been top,” Guardiola said. “Unfortunately last season we missed him a lot. We did incredibly well without him but we are stronger with him.

“Last season he didn’t have a holiday but he has had more time to rest and he came back like he did two seasons ago.

“Hopefully he can keep his level. He’s incredibly positive in his mind and his quality speaks for itself. He made an incredible first half, really good.”

Before the game, Guardiola discussed City’s search for a centre-back and how the identity of their new skipper will be decided.