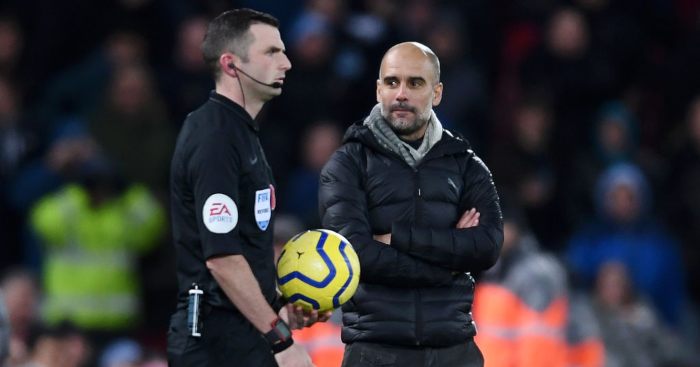 Pep Guardiola will face no disciplinary action from the Football Association for comments made to the referee after his side’s defeat at Liverpool.

Premier League champions Manchester City lost 3-1 at Anfield on Sunday to fall nine points behind leaders Liverpool in the table.

Guardiola was furious after two VAR decisions went against his side and was caught on camera saying “thank you so much” to referee Michael Oliver after the game.

The Spaniard insisted afterwards that he had not been sarcastic when thanking Oliver.

Fabinho’s early goal for Liverpool came moments after Oliver had waved away City’s appeals for a penalty for an alleged handball by home defender Trent Alexander-Arnold.

VAR backed up Oliver’s decision following a referral, while Guardiola was further incensed when another handball incident involving Alexander-Arnold late in the match also went in favour of the home side.

Guardiola refused to be drawn when asked about the controversial refereeing decisions in his post-match press conference.

He said: “You’ll have to ask (referees chief) Mike Riley and the big bosses about that. I’m not here to talk about the decisions over the referees or VAR. Don’t ask me, ask them.”

Liverpool doubled their lead through Mohamed Salah before half-time and Sadio Mane put them 3-0 ahead before Bernardo Silva struck a late consolation for City.