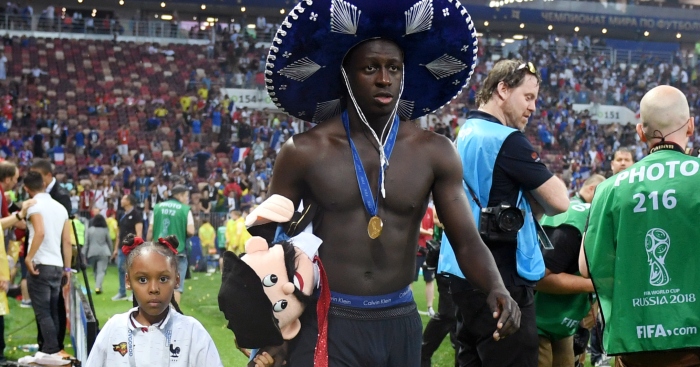 Pep Guardiola insists he has no issues with Benjamin Mendy.

The left-back has endured two injury-ravaged seasons since joining Manchester City and his off-field lifestyle has also raised questions about his professionalism.

The 24-year-old currently appears to be out of favour having been overlooked for selection since recovering full fitness following knee surgery last November.

Mendy was disciplined earlier this season for reporting late for treatment after attending a high-profile boxing event in London the previous night. He was also spotted in a nightclub in the early hours of last Saturday morning following his omission from the squad to play at Fulham.

But City manager Guardiola says he is still keen to get the best out of the Frenchman, a £49.1million signing in the summer of 2017.

Guardiola said: “Yes, of course I am happy. He’s a nice guy, he has an incredible heart, he is a funny guy.

“Sometimes, I have to understand his own culture, where he has come from.

“What we want to do is work with him to protect his knee, his condition, to help us, because we need him.

“Hopefully this part of the season and in the future, next season, he can be fit.”

Mendy could be recalled for Saturday’s FA Cup semi-final against Brighton, with Oleksandr Zinchenko, who has impressed as a makeshift left-back this term, out for around 10 days with a hamstring injury.

Guardiola, however, was non-committal about the situation when asked at a press conference ahead of the Wembley clash. Other options would include Danilo and Aymeric Laporte.

“I’ve almost decided but of course I can’t (tell you),” he said.

Guardiola confirmed top scorer Sergio Aguero could return after missing the midweek win over Cardiff with a muscle problem.

“He is almost fit, he’s travelling,” he said.

Meanwhile, Kevin De Bruyne has warned there can be no easing up – even if he cannot get back to his dynamic best this season – as City chase an unprecedented quadruple.

The Belgian playmaker, City’s player of the year during last season’s title victory, has also had a frustrating, injury-hit campaign. He accepts he now does not have the time to build the momentum he enjoyed last term, but that is of secondary importance.

The 27-year-old said: “I don’t know what my level is going to be but I don’t really care. Now it is the business end I just need to do what I can do to help the team win games.

“If that is playing five games or 10 games, I will take it all. It is like 12 or 13 cup games now. It makes it exciting and in the end maybe we will lose everything, but it is what it is.

“To be at this stage is incredible, so just keep on going, try to win Saturday and go to another final.”