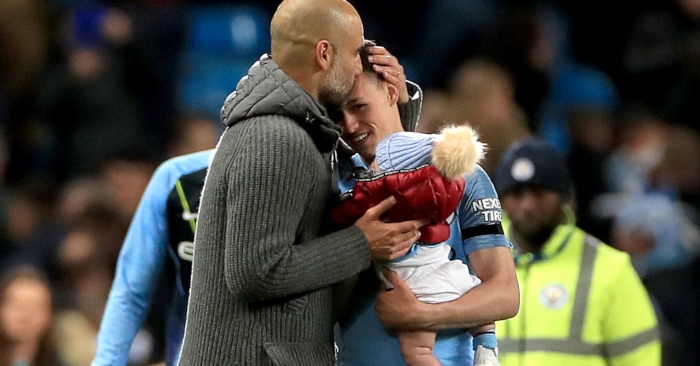 Guardiola called the midfielder the “most talented player” he had worked with during pre-season, but the 19-year-old is yet to start a game this season and has made only two late substitute appearances ahead of Saturday’s match against Brighton.

Guardiola was adamant that will soon change as European and cup games pile up for City after the international break, but he would have no objection to seeing Foden voice frustration over his time on the bench.

“He is a shy guy,” Guardiola said. “I would like him to talk more to me, but all the time I go to him and speak to him.

“He still looks at me with a little too much respect, and after two or three seasons it’s not necessary.”

Guardiola said he expects and wants to hear from his players when they are not getting regular starts, whether it be a teenager like Foden or a senior member of the squad like Fernandinho.

“I like it, I will argue,” he said. “Sometimes I tell them, ‘The reason is because I preferred your mate. I preferred the other one’. With this argument they cannot say anything.”

And the former Barcelona and Bayern coach admitted he can sometimes be persuaded to change his mind by a player.

“But I like it when players come and say, ‘I want to play’.”

Foden’s problem is that, in order to get in to City’s midfield, he must dislodge the likes of Kevin De Bruyne, David Silva, Bernardo Silva and Ilkay Gundogan.

“That is the reality in a team that achieved four titles last season,” Guardiola said. “If you don’t have this squad you can’t achieve four titles. Impossible.

“So they have to fight and be patient and don’t complain too much, don’t blame too much, because the time is coming.

“They have to be prepared because I saw today the schedule with all the fixed plan of the Champions League, away, home, and I said, ‘Wow, how many games do we have?’

“Everyone is going to have minutes.”