Man Utd were reliant on a last-gasp Bruno Fernandes penalty to snatch a 3-2 win at Brighton on Saturday. 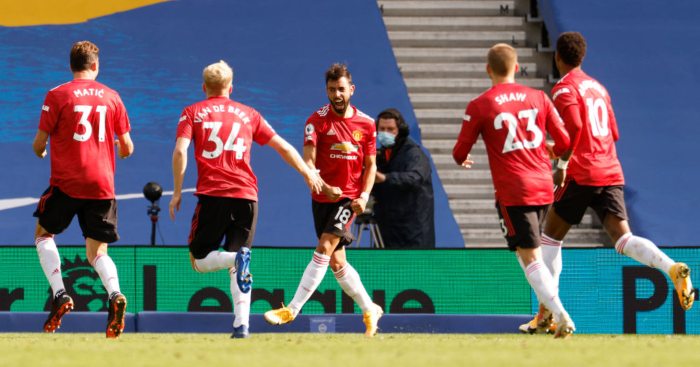 Peter Crouch is backing Man Utd midfielder Bruno Fernandes for the Premier League Golden Boot gong this season due to the amount of penalties they are awarded.

Man Utd were reliant on a last-gasp Fernandes penalty to snatch a 3-2 win at Brighton on Saturday, which followed last weekend’s shock 3-1 home defeat to Crystal Palace in the club’s opening Premier League fixture of the new season.

Fernandes confidently dispatched the spot-kick in the 10th minute of added time. Referee Chris Kavanagh had initially sounded the full-time whistle before checking the pitchside monitor and penalising Neal Maupay for handball.

JOHNNY NIC: Handball: The straw that breaks VAR camel’s back?

Referees gave Man Utd a record 14 penalties in the 2019/20 campaign with Fernandes dispatching six of those in the second half of last season.

“I have backed Bruno Fernandes to win the Golden Boot and I have done so on the basis that I will hear ‘penalty to Manchester United’ once a week from now until May,” Crouch wrote in the Daily Mail.

My arms would have given pens away every week 😩

“I found the spot-kick they got at Brighton on Saturday absolutely remarkable.

“I’m not sure how I would have felt to be on a side who thought they had a point at the final whistle, but then saw VAR come into play when the post-match handshake was going on. How does that work!”