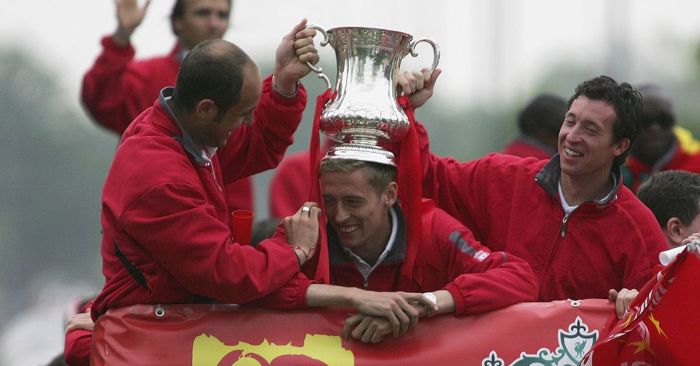 Crouch joined Liverpool for £7m in 2005, becoming the most expensive signing of the summer for the new European champions.

He left three years later for Portsmouth but is fondly remembered for his efforts at Anfield, scoring 42 goals in 134 games for the club.

The striker played with a number of icons on Merseyside, including Steven Gerrard, Jamie Carragher and Xabi Alonso.

But he was also at Liverpool for Fowler’s second spell, during which the elder statesmen infuriated then-manager Benitez.

FEATURE: An ode to the everyman yet special Peter Crouch

“There was an infamous trip with Liverpool in 2007 when we went to La Manga,” he told the Daily Mail. “An incident between Craig Bellamy and John Arne Riise took the headlines but there was a story about Robbie Fowler that has not been widely publicised.

“Rafa Benitez had allowed us a night off, but set a curfew of 10pm. Rafa was big on discipline and word reached the lads that he was roaming the corridors, on patrol. Robbie and I had broken the curfew, but fortunately we got back to our room without him seeing that we were late.

“Suddenly there was a knock on the door. It was Rafa.

“I looked over my shoulder, expecting Robbie to be in bed, but he was nowhere to be seen.

“As I was trying to come up with an answer, I caught a glimpse of Robbie out the corner of my eye. Somehow, he’d hoisted himself on to the top of a wardrobe and was crammed into the tiniest space. He knew I couldn’t say, ‘He’s behind you, Rafa’.

“So there he was, in this little space, enjoying watching me trying to say something sensible. Rafa, oblivious to it all, became more and more exasperated as I mumbled ‘I don’t know’, while biting my lip so I didn’t burst out laughing.

“There was no way to placate Rafa. He went off muttering, promising to take action in the morning. When the door closed, Robbie dropped down with a smile on his face. If there was mischief to be had, Robbie knew exactly how to find it!”