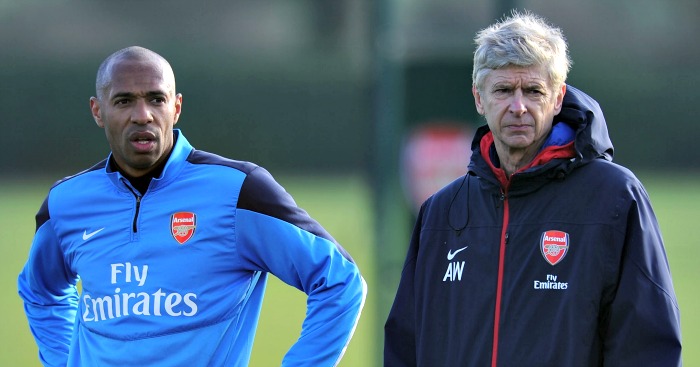 Emmanuel Petit admits he is “surprised” that more former players are not among the Arsenal coaching staff.

Dennis Bergkamp, Patrick Vieira and Thierry Henry, each integral members of the Gunners side which adorned the Premier League since the turn of the millennium, have all sought employment elsewhere at the start of their coaching careers.

Bergkamp is assistant manager at Ajax, Vieira is current manager of New York City FC in MLS, and Henry is a coach for Roberto Martinez’s Belgium.

Henry is the only one of the trio who spent part of his early years in coaching with Arsenal, but he only ever worked with the club on a part-time basis.

Petit, who played for the Gunners from 1997 to 2000, has expressed his surprise that none of them are working under Arsene Wenger at the Emirates Stadium.

“You’re often surprised by the career choice of some players after they have stopped playing,” Petit told SFR Sport.

“I spoke to Vieira a few months before he left for MLS, there were representatives of Manchester City there, and I said that I was very surprised that Manchester City would offer a player who is so closely identified with Arsenal a job at their youth academy, like Arteta with Guardiola.

“I think Arsenal have missed a trick there, because there are other emblematic players who have left: Bergkamp is at Ajax, Thierry is with Belgium.”