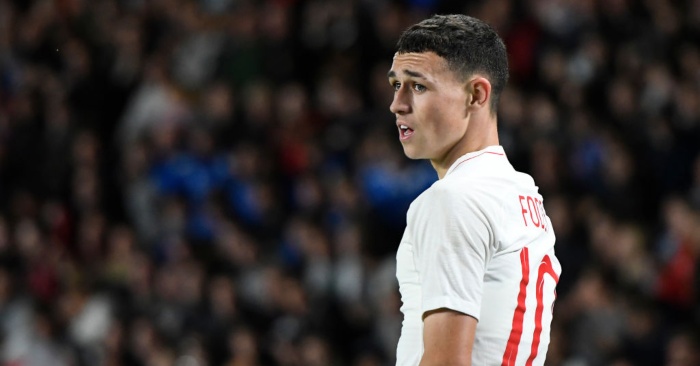 England Under-21s coach Aidy Boothroyd said it was exciting to think how good Phil Foden can eventually be after his side’s 2-0 Euro 2021 qualifying win against Kosovo.

Foden struck midway through the first half and again in stoppage time to give the scoreline a fairer reflection of England’s dominance in front of a crowd of 15,258 at the KCOM Stadium.

“He’s probably not played as well as he can do actually,” said Boothroyd after his Young Lions followed up Friday’s 3-2 win in Turkey by ensuring six points from their opening two Group Three matches.

“He’s obviously happy with his goals and that’s a mark of a good player, always wanting to be better.

“He took his goals really well and the more he plays for us, hopefully it can be a little showcase of what he can do for his club.

“If Phil keeps doing what he’s doing and keeps learning. That’s the great thing about him, he wants to be better.

“He knows he’s not as good as he can be yet and that to me is the most exciting thing about him.”

Boothroyd was disappointed his side did not turn their superiority into more goals, while an injury to Max Aarons also gave him cause for concern.

Aarons was forced off in the 80th minute with an ankle injury after his superbly-timed last-ditch tackle thwarted Kosovo’s best second-half chance.

“Along with Tom he was outstanding tonight,” Boothroyd said. “It’s a shame he’s got himself injured. It was a brilliant block.

“That’s what you want from your players, isn’t it. Putting your body on the line. The block he made was superb.

“I don’t think it’s serious. It’s too early to tell, but it’s not a hospital job.”

“I guess that’s the only (criticism) as a coach,” Boothroyd added.

“You want to always be the best you can be and I think if we were a bit more clinical with the chances we created, then it would have been a lot easier for me, certainly on the side watching it.

“But we’re delighted to get six points on the board. We’re chasing the pack really because they’ve all played more games, so to be where we are is a lovely start.”