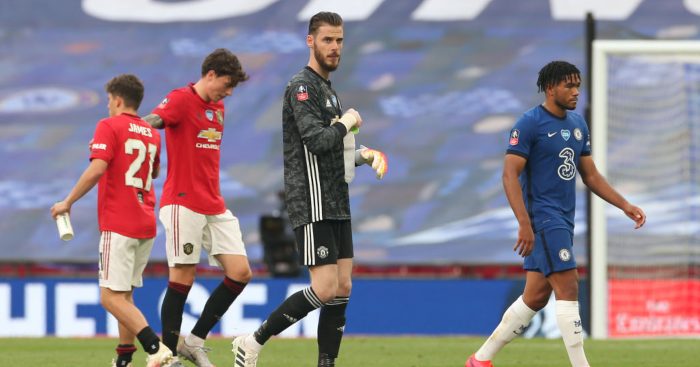 Phil Neville thinks Ole Gunnar Solskjaer should be “worried” over the form of David de Gea, while Alan Shearer reckons the Man Utd goalkeeper should be dropped next season for Dean Henderson.

De Gea has come under heavy criticism recently after making several high-profile errors leading to goals with more criticism coming his way following the Red Devils’ 3-1 loss to Chelsea in their FA Cup semi-final on Sunday.

An empty Wembley Stadium played host to the top-four rivals’ fourth meeting of the season, with the Blues making amends in some style for defeats in the three previous encounters.

Olivier Giroud put Chelsea ahead in first-half stoppage time, with De Gea somehow letting through a long-range Mason Mount strike moments into the second half before Harry Maguire scored an own goal.

Bruno Fernandes’ late penalty was scant consolation for Man Utd and Neville reckons Solskjaer needs to be concerned about his number one.

“He’s unrecognisable from the player that won Player of the Year awards,” Neville told BBC Sport when asked about De Gea.

“If I was Solskjaer I’d be worried. His credentials are still up there with the best in the world but he’s lost all his confidence.”

Also speaking to the BBC about De Gea, Shearer added: “If the goalkeeper has made one, possibly two [errors], you’d think, ‘okay, stick with him’. But now you’d think it’s time [to change].

“It wouldn’t be so bad if it was just one, but it keeps happening.

“I think you bring him [Henderson] back to Manchester United when you think he’s going to be the No.1.

“I don’t think there’s any point bringing him back to sit on the bench. If you’re going to bring Henderson back he has to bring him back as No.1, otherwise let him stay out there and keep on gaining experience.

“But has the time come? Yes. The time has come for that.’