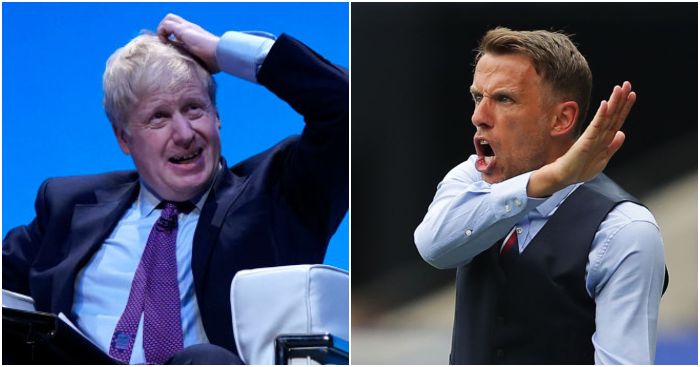 You may have noticed that there’s a leadership debate going on at the moment, albeit between two people who are wholly unsuitable to be leaders. Approximately 0.3% of the electorate, most of whom seem to be obsessed with delivering the decision of a democratic vote, will – without any understanding of the word ‘irony’ – assign a Prime Minister to the other 99.7% of us and for a few months we will have a blank-eyed drone or a morally dubious Poundland Bagpuss at the helm of the country, at least until we rise up, drag them out of Westminster by their ankles and install Phil Neville as benevolent dictator.

Following the England v Cameroon game on Sunday, he really showed his mettle, spoke brilliantly and honestly, spoke with passion and soul about the game with Cameroon. It provided a sharp contrast to a political debate which is an exercise in rank stupidity, obfuscation and of blatant idiocy being offered up as wisdom.

There was much doubt about Phil’s appointment and it was only fair that some sceptical eyebrows were raised when a man who had never worked in women’s football and never been a boss at any level was appointed the Lionesses manager.

He has clearly grown into the role; he didn’t assume he knew everything from the start, but has grown, developed and educated himself. It’s been superb to see. In doing so he has garnered the respect of absolutely everyone. The strong team ethic he has encouraged, shaped and harnessed is visible for all to see in his players.

It is a victory for what we might call the beta male. That is for the man who is understanding, sensitive and has empathy and emotional intelligence. In this he is walking the same path as Gareth Southgate, who has achieved results almost wholly because of his aptitude for managing modern footballers.

Indeed, if the old school Alpha male managers were the shout-til-their-eyes-bleed types, if they were basically bullies who scared players into performing, their days have clearly passed.

Obviously, tactical nous is important for in-game decisions but most of the management must perforce be done outside of the 90 minutes on the grass (or 120 minutes if it’s a heavy VAR session) and is more about psychology than it is ever about tactics.

We know from our own experience how realistic and genuine self-belief can upgrade our own performance in everything we do, from work, to sports, to the bedroom, and how lack of it can make life so much more difficult. The successful modern managers seem to be people who understand this implicitly, but without overindulging it and turning it to narcissism or arrogance.

In the men’s game, all the top managers could reasonably be called beta males from Pep Guardiola downwards – men who understand that people respond better to love than to hate. I suppose it used to be called fostering team spirit but really that was psychology. It was understanding the people working for you.

Of course, as Manchester United will learn early into the new season, you can’t be successful by just making people feel good, you have to your football manager chops down too and you need half-decent players, but even so, time and again we’ve seen teams of excellent players be disjointed and insipid through being managed in an emotionally or psychologically inappropriate way.

England have been misfiring during this tournament and have yet to turn in a really convincing full 90 minutes – especially in defence – and that is something they are likely going to have to do to overcome a very good Norway team in the quarter-finals, but in France and previously in qualification games, Neville has clearly built something. Something that isn’t quite yet at a peak but which has a strong sense of direction. Not once has it felt like each game is a one-off but rather the latest piece in a large jigsaw placed into position as carefully as possible. That’s very much a compliment to him and his team.

And yet Silly Billy Philly, as we used to call him, the perennial 50) in our tournament ladder, is an easy target for pish-taking in a way that the decidedly alpha male Gary isn’t. That ever so slightly fey tone to his voice, the earnestness to his comments and sometimes overkeenness to say something profound or insightful, are all anathema to the emotionally repressed, f**k you and all who sail in you, I’ll do what I want mate, alpha male. And while his brother Gary isn’t quite that, it is nonetheless instructive as to who has been the better, more successful manager between those two.

Some of the old guard will tell you with a sad shake of the head that you can’t shout at players anymore because they’re not emotionally robust enough to take a right bollocking or a right-hander, so what are you supposed to do? But the likes of Neville have totally understood that you have to move with the times and understand how players are today.

It has been impressive how holistically he’s seen his role, a role which isn’t just managerial but also to act as a kind of development officer, promoter and ambassador for the women’s game, which is why after the Cameroon game he was keen to say how the Africans had set a bad example to young girls of how to behave on the pitch in protesting the VAR decisions.

Hope Solo described Philip’s coaching this tournament as ‘incredible’ and whether England make further progress or not, he has proven himself to be an articulate, thoughtful, intelligent, most modern, progressive and successful manager.

What a pity we will not have a Prime Minister about whom we can say any of those things.