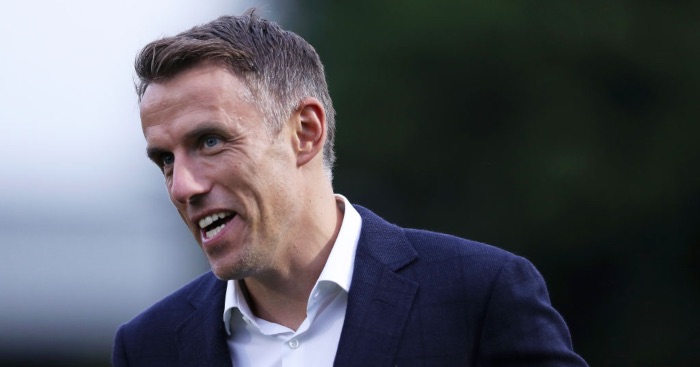 Former Manchester United defender Phil Neville has praised Pep Guardiola’s decision to play Rodri and Fernandinho at the back in Manchester City’s 2-0 win over Crystal Palace on Saturday and suggested the Spaniard may continue to field midfielders in central defence.

Guardiola was forced into the call due to injury and hailed both Rodri and Fernandinho for their performances against Palace.

The England women’s national team boss explained on BBC’s Match of the Day that the move enabled City to dominate possession and believes we will see more of the same tactic this season.

“I don’t think there are many managers in world football who would have the courage to play two central midfielders at the back,” Neville told the BBC. “When you have 70 or 80% of possession I think you can afford to play footballers like Fernandinho and Rodri at the back. They had the most passes in the game.

“A lot of those passes were in the Crystal Palace half because they played so deep. Pep said after the game the speed and intelligence helped Man City play that way today.

“He is not afraid to play a midfielder at the back because they have so much control of the ball. He did it with Mascherano at Barcelona. What that allows is David Silva and Kevin de Bruyne to play a lot higher.

“Don’t be surprised if those two, particularly Fernandinho continue in that back four.”