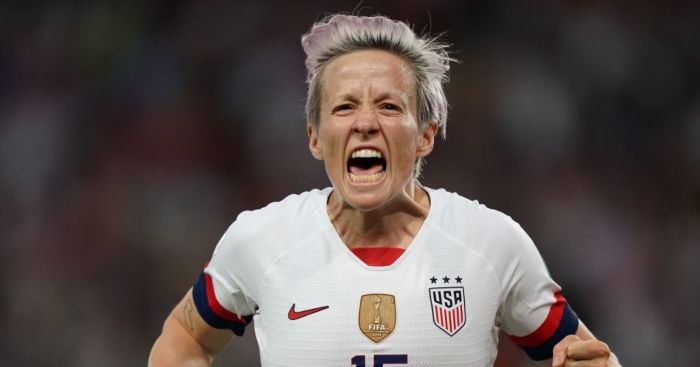 England boss Phil Neville has spoken of the admiration he has for Megan Rapinoe – despite the United States star breaking his watch.

Neville’s side take on the US in Lyon on Tuesday in the Women’s World Cup semi-finals.

Rapinoe scored a brace in each of the last two rounds as the defending champions beat Spain 2-1 and then France by the same score.

When asked about the 33-year-old forward at his pre-match press conference at Groupama Stadium on Sunday, Neville said: “Megan is someone from day one that I have really admired.

“I remember in my first SheBelieves Cup (in March 2018) when a ball bounced on the touchline, I went to catch the ball and her studs came right through my watch – and she’s not repaid me yet for that watch!

“What I like about it is she didn’t say sorry, she just got on with it. She’s a winner.

“I like the individuality both on and off the field and I think she’s a world-class footballer.”

Rapinoe has been criticised on Twitter by US President Donald Trump after she said “I’m not going to the f***ing White House” when asked if she would visit should her team be victorious at the World Cup.

Rapinoe, who is gay, has previously accused Trump of being “sexist” and “misogynistic” and she refuses to sing the national anthem before matches.

Neville was asked what he thought about Rapinoe’s stance against Trump, and he said: “I admire people that have personality and character, and people who stand up for what they believe in, and with strong values.

“I admire Megan Rapinoe for standing up for what she believes in, in terms of a lot of things – the fight for equality, the fight for diversity and inclusion that she fights and campaigns a lot about.

“Personally I would never get involved in any political issues – I am a football manager, I don’t know anything about politics, I don’t like it when politicians get involved in football. I think it is ‘just stay in your lane’ sometimes from my point of view.

“But if you’ve got views and values and want to air them and you’ve got a platform to do so, I admire people who will stick their head above the parapet.

“We as footballers and managers have a platform to influence and show kids around the world that being a footballer and influencing people and doing the right things is the right thing to do.”

England, third in the world rankings that are topped by the US, are aiming for what would be their first Women’s World Cup final.

Neville has stressed the Lionesses will see it as “a failure” if they are beaten by the three-time world champions, who they drew 2-2 with in Nashville en route to winning this year’s SheBelieves Cup.

He said: “You go to tournaments to win. I said earlier in the week nobody cares about who loses in a semi-final, it’s all about winning and my players now want to win, so if we don’t get the right result, we will be disappointed.

“We will feel the disappointment and we’ll see that as a failure – and that’s not me being negative, that’s just our expectations, and our belief and our confidence now. Our mindset is about winning.”