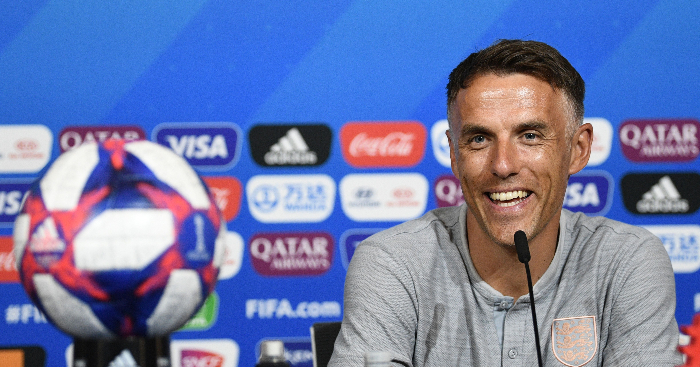 England boss Phil Neville has admitted his bemusement at the presence of a member of the United States’ staff at the team’s hotel ahead of their Women’s World Cup semi-final clash.

It’s been reported that a representative from the USA camp visited the Marriott Hotel, where the England team are currently staying, in an apparent ‘reconnaissance mission’.

“We’re happy with our hotel. We were training, so I hope they enjoyed our hotel. But it’s not something that we’d do, send somebody round to another team’s hotel.

Neville also revealed he had no fresh selection problems ahead of Tuesday night’s game in Lyon.

He said: “No, no injuries, no viruses ravaging our squad this time.”

Neville and his team arrived in France determined to return with the trophy, and their belief remains undimmed despite the holders standing between them and a place in the final.

He said: “You go to tournaments to win. I said earlier in the week about semi-finals – nobody cares who loses in a semi-final, it’s all about winning and my players now want to win, so if we don’t get the right result, we will be disappointed.

“We will feel the disappointment and we’ll see that as a failure – and that’s not me being negative, that’s just our expectation, and our belief and our confidence now and our mindset is about winning.”

Skipper Steph Houghton was asked about tennis star Serena Williams watching the team train earlier in the tournament, and how impressed the American had been by what she saw.

Houghton said: “It’s been documented well that Serena was at our hotel and a few of the girls were fan-girling her. She’s an icon of women’s sport and rightly so.

“She’s won so many medals, so many trophies, best tennis player in the world and for us to see her train as well on the court was an unbelievable experience that nobody really gets the honour of doing.

“For her to say that about us is amazing for this squad. That’s what we want to pride ourselves on, the hard work, the ability to be one of the fittest teams in the world and to be really humble in everything that we do, so for someone of that calibre and so much status to say that about me and my team-mates is unbelievable and I’d like to thank her for that.”