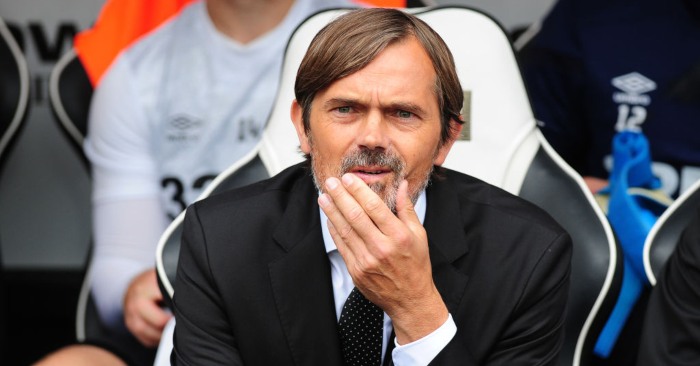 Morecambe and Wise. The Two Ronnies. Derby County and end-of-season heartache. The link? All partnerships enjoyed by the vast majority of the population. But Derby fans have had enough of being the butt of the joke.

If insanity is to repeat the same thing over and over again while expecting different results, then Rams supporters must be preparing the Pride Park straitjackets. Four failed play-off campaigns in six seasons have led to resentment towards a period of football so synonymous with joy.

All too often, Derby start seasons in splendid form before tailing off around February/March and letting the lost momentum derail their shot at the Premier League prize many a manager in Derbyshire has craved but failed to achieve since Billy Davies in 2008.

Philip Cocu is the latest man to take the Pride Park hot seat, an appointment which brought excitement and intrigue in equal measure to DE24. Like his predecessor Frank Lampard, the Dutchman brought with him a stellar playing career and the idea that young players could learn from the very best.

Unlike Lampard, the 48-year-old also comes with successful managerial baggage, though his most recent spell with Fenerbache was all too brief to gauge whether three wins from 15 would be improved over time.

Cocu had struggled initially in his first managerial post with PSV Eindhoven before going on to break Ajax’s Eredivisie stranglehold with three titles in five seasons at the Philips Stadion. It seems Cocu has to twist the screw before seeing his efforts pay dividends.

Going into the first international break of the season, Derby sit not in their familiar position in the top six, but in the lower echelons of the Championship. This is unprecedented for a side synonymous with failure in May, not September.

The final game before the first week off of the new season brought the Rams down to earth more than anyone would have envisaged. Against Brentford, they were outfought, outclassed and outplayed by a side for whom only Ollie Watkins had scored before the match.

A second successive 3-0 reverse including defeat to bitter rivals Nottingham Forest in the EFL Cup makes the opening month even more difficult to swallow, but there are plenty of reasons to be optimistic.

Did Cocu get the memo about #nffc being a local Derby? Appalling team selection. I feel cheated out of going tonight. Men against boys. Onwards and upwards.

Funny as it seems to suggest after those recent results, Cocu has already gone about making the side look more defensively unified, if not quite stable. Bearing in mind the likely blip at Griffin Park, EFL Cup ties are not definitive proof of how a manager’s tenure will shape up early on.

Without Jayden Bogle, fellow youth academy graduate Max Lowe is deputising at right-back against his favoured left foot. That in itself makes a difference, but unlike at times with Lampard, the defenders all know their jobs, even if they don’t always execute the plans absolutely.

Lampard had his system and by and large, it worked until the crunch of the season. Cocu meanwhile, has had a decade-long coaching career alongside seven years as a manager to try out a multitude of systems and right now, he is still deciding on the best one to take Derby forward.

Some have accused Derby of having a play-off hangover, but that is not the case. Derby have tried their last liquor, signed up for Stoptober and can so easily reap the rewards of a clear head over a long stretch if they can keep the man at the top beyond the end of the season.

Derby’s cause has not always been helped, especially in recent years, by a high turnover of managers taking on yesterday’s players. Cocu is instead looking to tomorrow. Last season, Lampard had a penchant for playing other club’s best young players. This season, Cocu is looking a little closer to home.

Mason Mount and Harry Wilson accounted for nearly half of County’s goals in 2018/19 and it is no surprise to see both flourishing so early in this Premier League campaign. Derby knew they had to get promotion to have any chance of seeing either of the young pair back at Pride Park in white and black this time around.

Aston Villa’s victory meant that wasn’t the case, but Jason Knight, Lee Buchanan and Lowe have all played large parts in the admittedly disappointing start to the season. But look at the front-runners and favourites for promotion in the Championship this season: Brentford, Bristol City and Leeds United chief amongst them.

Each of those three clubs are well into sustained and well-planned projects. Derby conversely, have not always held the clearest of maps in their hands. They now have the leader of the expedition of this young squad.

Mel Morris signed Cocu on a 4 year deal with a long term plan:

What they simply have to admit is that promotion is not the immediate goal. To believe so would be confining themselves back to insanity. Derby have taken themselves off the never-ending cycle of end-of-season disappointment and have a chance to reinvent their own wheel.

This side is not good enough to go up. Take the Derby crest off of their chests and stick them in a stadium half the size and not nearly as glamorous and that becomes clear to see; Cocu should not be judged on the same merits as his predecessors.

Gunning for immediate success is not sustainable when bringing through the kids and making up for the mistakes of those who have come before. Derby have a real chance of building something, just like the majority of the sides in the top six. This must be the start of a new journey, not a continuation of the last.