Home All The News Pickford discusses penalty save and Everton move 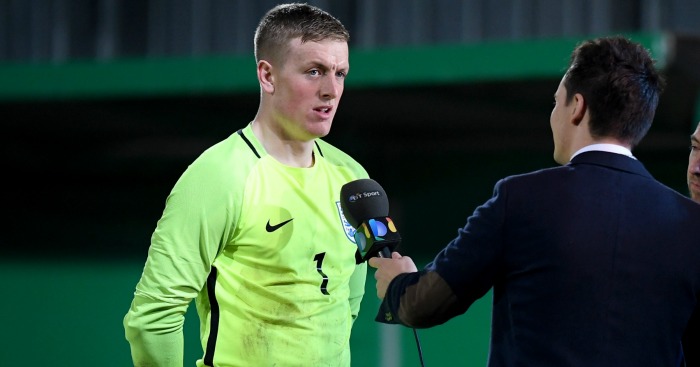 England Under-21 boss Aidy Boothroyd hailed “super” Jordan Pickford after the goalkeeper’s penalty save rescued the Young Lions against Sweden.

The new £30million Everton man kept out Linus Wahlqvist’s late spot-kick as England clung on to a 0-0 Euro 2017 draw against the defending champions.

And Pickford’s heroics in the opening game of the tournament on Friday earned praise from Boothroyd.

He said: “It was disappointing to concede a penalty – I’m not sure it was – but it was given so it was. Of course we have our super goalkeeper that keeps penalties out. He did very well.

“We’ll look back it and say it’s a defining moment, I hope. It is important when we don’t play well we dig in and make sure we don’t get beaten.

“He has had quite a week. Most people would struggle to deal with what’s happened and have some sort of dip, but touch wood he doesn’t. I thought he was excellent.”

Pickford only completed his record-breaking move to Everton on Thursday and became the third most expensive goalkeeper in the world.

“I just waited a bit longer, held my ground, dived to the left and got my top hand to it. It’s what you do,” he told Sky Sports.

“The main thing was not to lose the game. It would’ve been nice to get the three points. Winning the first game’s always nice in tournament football. But we’ve come away with the draw, and it’s down to us to win the next two.

“It’s nice to get it (the move) out of the way, and I can concentrate on the Euros and go as far as I can with England.

“It’s a great club to go to, to move that next step on my journey. I feel like Everton was the best place for me.”

Group A also includes hosts Poland and Slovakia and, with only the three pool winners and best runners-up going through, England must improve.

Boothroyd added ahead of Monday’s game with Slovakia in Kielce: “We want to qualify for the semi finals and in order to do that we have to win games, but it’s also really important we didn’t lose.”

Tammy Abraham twice fired over in the first half, while Chilwell’s deflected drive looped on to the bar after the break, but Pawel Cibicki also hit the woodwork for Euro 2015 winners Sweden.