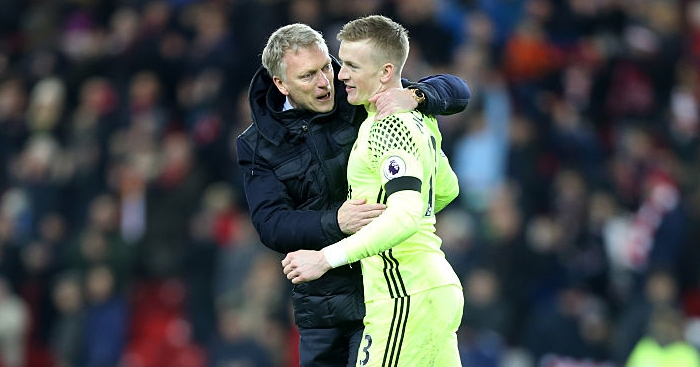 Jordan Pickford has hit back at David Moyes after the former West Ham manager criticised his diet.

Pickford worked under Moyes for one of his six years in the Sunderland first team, coinciding with the club’s Premier League relegation.

It was during that season that Pickford emerged as one of the best young goalkeepers in the country.

But Moyes looked to keep his feet on the ground, questioning his diet back in October 2016.

“Jordan’s framework will change and he needs to look at the work he’s doing in the gym and also what he is eating,” Moyes said.

“I’m just getting that information passed onto me about his eating. He needs a programme to make sure he continues growing in the right way, because this career is short and, if you want to be at the top, you have to do all those things to get yourself there.”

Pickford has since responded, telling his former manager that he “wasn’t going to McDonald’s every week”.

“I was always eating healthy, I wasn’t going to McDonald’s every week like the gaffer, Moyes, said at the time,” he said.

“A nice pizza after three points isn’t a bad way to have it. And we’d be having more than a pizza if we win the final.”