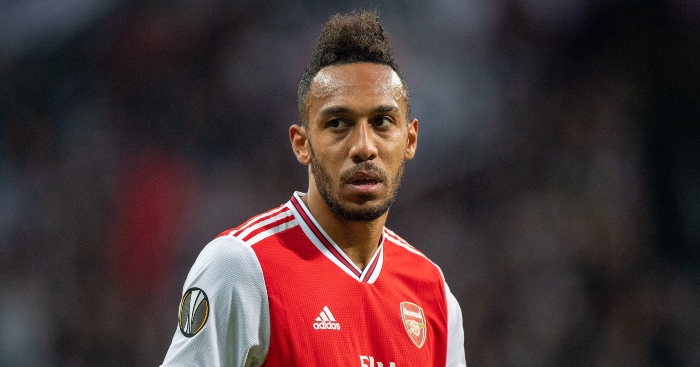 Reports in Spain suggest that Pierre-Emerick Aubameyang could make a U-turn and sign a new contract at Arsenal despite interest from elsewhere.

The Gunners striker has been tipped to leave the Emirates Stadium this summer, with his contract expiring in 2021 and the likes of Barcelona and Inter Milan interested in his signature.

With Arsenal having lost Aaron Ramsey to Juventus on a free transfer last summer, they are said to be wary of allowing the same to happen with Aubameyang, which may have led them to consider his sale when the transfer window re-opens.

F365 Says: Selling Aubameyang for £30m would be foolish…

However, in an unexpected boost for the Gunners, Catalan publication Sport now claim that Aubameyang is more likely to sign a new contract at the Emirates rather than leave.

That may come as a surprise, as previous reports had indicated that talks over extending his deal had stalled, while Wednesday’s papers suggested Arsenal would even accept bids as low as £30m to ensure they got something in return for his exit.

Should the claims from Sport be correct, though, it would seem that Arsenal will have less to worry about his potential departure – and given how important his goals are to the club, it will surely come as a relief for Mikel Arteta and his staff.

The Gabon international, who serves as their club captain, is also said to have received offers from Premier League rivals Chelsea and Manchester United, but has been advised by his relatives to stay put – and he appears to have been convinced.

Former Arsenal star Paul Merson also recently suggested the 30-year-old was better off remaining where he is.

“Aubameyang is at an age now where he will play every week for Arsenal,” explained the Sky Sports pundit. “If he goes to, say, Manchester United or somewhere else, four or five bad games and you are out of the team.

“He’s going to play every week at Arsenal and when you are coming towards the end of your career, two or three years to go, you have got to enjoy your football and play.

“If I were Aubameyang’s agent I would be stressing that he is at one of the best clubs in the world, a phenomenal football club that has as much chance as anybody, bar Manchester City and Liverpool, winning something. For me, I would stay.”