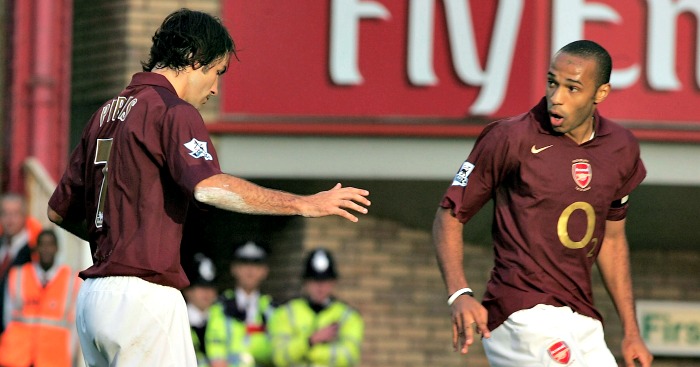 Robert Pires says that Danny Mills found it “hard to understand” the Frenchman’s supposedly ‘disrespectful’ penalty against Manchester City in 2005.

After Lionel Messi and Luis Suarez received part praise, part criticism for their penalty for Barcelona against Celta Vigo last weekend, Pires was forced to relive memories over his failed effort against Manchester City in 2005.

Attempting to pass the ball to Thierry Henry when awarded a penalty at Highbury in October 2005, Pires instead conceded a free-kick after touching the ball twice when his initial pass failed.

Writing in The Times earlier this week, Mills explained why the Messi-Suarez penalty was treated differently to the Pires-Henry version.

The former England international wrote: ‘There are times in football when you simply have to hold your hands up and admit you have been beaten by someone better than you.

‘That is why Celta Vigo’s players did not respond to Suarez and Messi with the anger I felt with Pires and Henry.

‘They could see it for what it was and they had no choice but to admire it. Your frustration is with yourself for conceding.

‘It is the same with the Panenka. If it goes in, great. If the goalkeeper just stands still and watches as the ball drifts harmlessly into his arms, then what might have looked clever and sensational simply looks arrogant.

‘You have fallen into the trap of thinking you are better, perhaps smarter than you are.

‘That is the golden rule when trying something different: to make sure you stay on the right side of the line between genius and stupidity. Make sure it works.’

After responding to Mills’ similar claims over Pires’ diving, the Frenchman has reacted in kind to the above.

‘I knew when I saw Lionel Messi and Luis Suarez’s penalty for Barcelona on Sunday that people would look back at the failed attempt from Thierry Henry and me a few years back for Arsenal against Manchester City,’ Pires wrote, also for The Times. ‘I have no problem with that. We tried it, I messed it up, it was kind of funny and we moved on.

‘However, when I read Danny Mills’s comments in The Times on Tuesday and how he felt we were disrespectful, I wanted to set the record straight.

‘When Messi and Suarez try it, it’s magical but when Pires and Henry try it, it’s a lack of respect. That doesn’t make any sense. The rules of football allow you to take a penalty like that. We were within our rights, our intention was never to disrespect anyone. People did it before us and people have done it after us. It’s like that Panenka or other ways of taking a penalty.

‘It didn’t work for us, it was a shame but we still won the game. We didn’t insult or hurt anyone. Obviously, for Danny Mills at the time it was hard to understand that you could actually take a penalty like that. Maybe he didn’t even know it was allowed.

‘The story of our missed penalty is actually a funny one. The day before the City game, Thierry and I practised it at training. There was one difference though: he was passing and I was scoring. We never said we would do it against City if we had a penalty.

‘It turned out that we got one. I took the ball to take it, Thierry didn’t say anything and I scored it, putting the ball on the right of the goalkeeper. Then when we were awarded a second one, Thierry approached me and said: “Let’s do it but we change the roles, you pass and I score!”

‘I replied that I didn’t feel like doing it. The game was not won yet, it was a tight game and I just thought he should just take it normally and score. But he insisted, so I acquiesced.

‘Unfortunately, my mind was not into it. It makes me smile now when I think about it, but my brain froze as I was about to roll the ball to him and I missed it! I can see the funny side of it. But disrespect? No way. I have always had the most respect for all my opponents.’