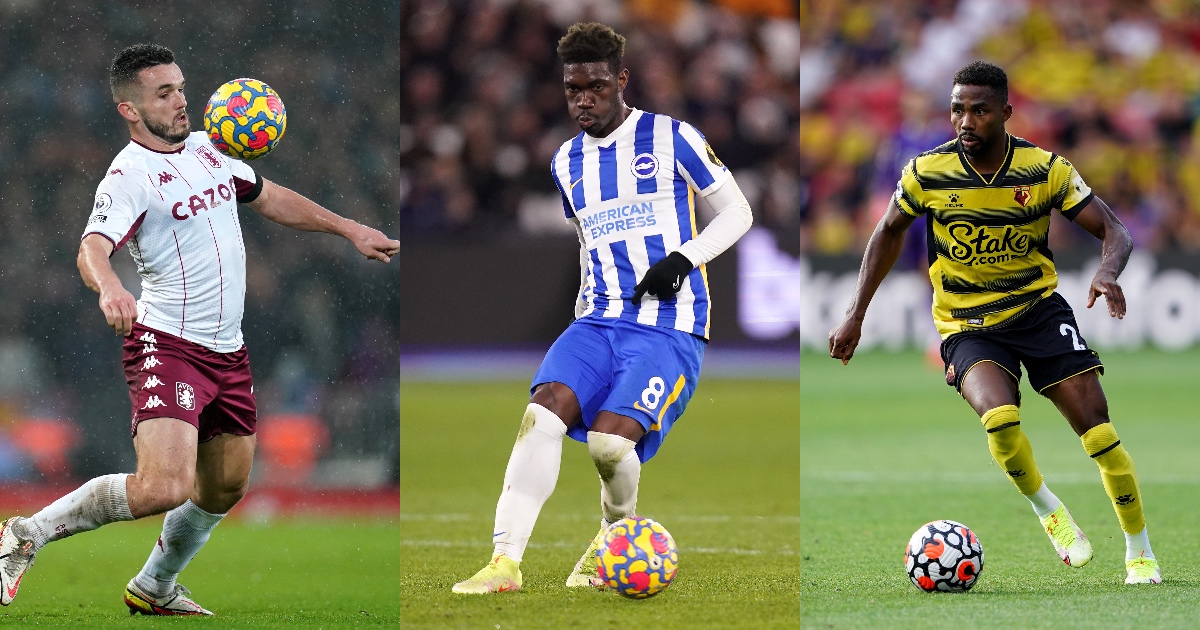 Don’t you just hate it when you support a ‘small club’ and pundits tip your best players to move to a bigger one? Well, you’re not going to like this.

We’ve selected one player destined for the shiny lights of the Big Six from each of the other 14 worthless minnows.

Aston Villa: John McGinn
A salt of the earth midfielder who runs with the ball as though he’s a 12th century peasant with the last loaf of bread in the village. He tackles, shoots, and does just about everything with an undisclosed chip on his shoulder, meaning it’s all done quickly, efficiently, and nine times out of ten, very well indeed. Jurgen Klopp would undoubtedly love his grit and energy, while you sense his ability to play as far forward or back in midfield as necessary would be a huge help to Manchester United.

Brentford: Ivan Toney
With five assists, two goals and a major role in the winner against Wolves on Thursday having taken on the captain’s armband, there have been calls for Arsenal to offer Alexandre Lacazette a new contract; he’s certainly been a better leader than his predecessor. Should Lacazette leave the club in the summer, Toney should be in the frame to replace him. That’s if Mikel Arteta wants a striker to play in a similar fashion: dropping deep, linking play and being as much a creator as a goalscorer.

Brighton: Yves Bissouma
Graham Potter described the latest transfer window as ‘groundhog day’, referring to yet more speculation he could be without his star midfielder come the end of January; he was asked about Bissouma in just about every press conference. And just about every Big Six club has been linked with the outstanding box-to-box midfielder, who when asked who he thought the best midfielder in the Premier League was, replied: “It’s me.”

Burnley: Maxwel Cornet
Peeling back the curtain just briefly, before we at F365 decide to do any of these ‘one per clubs’ we always first put it to the ‘Burnley test’. Essentially, if we can think of a player for Burnley, it’s a go. The inevitable saviour of many a ‘one per club’ over the past few years has been Dwight McNeil. We love you, Dwight. But with just one assist and no goals this season, a big move is surely no longer forthcoming. The most likely recipient of such a contract is Cornet. He’s scored six goals from just 12 Premier League starts in a debut season blighted by niggling injuries. As a winger or forward he may struggle to pass the Burnley test, but as a wing-back he’s strolled it.

Crystal Palace: Tyrick Mitchell
Mitchell has played all but eight minutes of Crystal Palace’s 27 Premier League games this season. Roy Hodgson drew a direct parallel between Mitchell and fellow academy full-back graduate, Aaron Wan-Bissaka. The former Palace manager’s claim of footstep-following was presumably sparked by his speedy rise to Premier League prominence rather than a transfer to Old Trafford, but there will undoubtedly be big boys tracking the impressively consistent 22-year-old. But there will be questions (as there still are with Wan-Bissaka) about whether Mitchell can grow into a full-back whose forward menace matches his defensive capability.

Everton: Dominic Calvert-Lewin
Three goals in the opening three Premier League games of the season, but none since, with injury denying him the chance in the majority. Thought to be Arsenal’s third choice in the summer and again in January – behind Dusan Vlahovic and Alexander Isak – he could well be a pretty cheap solution should Everton go down, though him scoring goals to keep them up would also improve his chances of a high-profile exit.

Leeds: Raphinha
Having come off the bench to assist two goals on debut for Brazil, Raphinha has established himself in the national team, starting five of their last six World Cup qualifiers. But while his international career goes from strength to strength, he’s looked thoroughly peeved in a Leeds shirt in the last few weeks, and looks like a man who wished he had pushed for an exit in January or before. He’s a Champions League-level footballer, playing for a team that has done the unthinkable to avoid relegation to the Championship.

Leicester: Wilfred Ndidi
Asked for his take on Aston Villa being linked with a £50m summer move for Ndidi, Brendan Rodgers said “he’s worth much more than that” and we tend to agree. He’s also, with all due respect, worth more than Aston Villa. Consistently near the top of the tackles and interceptions charts in the Premier League, Arsenal, United or Tottenham would all be improved should they make a summer move for the 25-year-old.

Newcastle: Allan Saint-Maximin
He would be in danger of becoming just another forward should he move to a Big Six side and we would be in danger of being denied his brilliant bedlam if he was coached to suit a certain style . He currently has the freedom of St James’ Park to be a maelstrom of dribbles and tricks and, given their new-found wealth, could be one of few to survive what will be a continued cull of the old to make for the new as they inevitably make it a Big Seven.

Norwich: Brandon Williams
We probably should have used the ‘Norwich test’ for this feature as Williams admittedly doesn’t really count. But he’s been good and Ralf Rangnick has already assured him that his future is at Old Trafford, where he will sit on the bench for two years before joining Burnley.

Southampton: James Ward-Prowse
Quite possibly the best free-kick taker in world football, Ward-Prowse has been playing as if he’s 30 years old for the last five seasons and he’s still only 27. Gary Neville recently hailed his maturity and was searching for further examples of players “whose career has just gradually got better and better all the way through” as he tipped him for a “big club” move this summer. Southampton could really struggle without a player who is among the most important individuals to their team in the Premier League.

Watford: Emmanuel Dennis
Only five Premier League players have more goal contributions than Dennis and three of those have 15 to his 14. That feat would be impressive in a debut season for Manchester City, let alone Watford. That’s more than any Big Six player except Mohamed Salah, Heung-min Son and Bruno Fernandes. No Arsenal player has more than his nine goals or more than his six assists.

West Ham: Declan Rice
West Ham have got more than one but Jarrod Bowen will have to get in line, because Rice has been waiting a while. Surely the only hope the Hammers have of keeping the England international is to qualify for the Champions League. Pigeon-holed as a defensive midfielder who may even be better off as a centre-back, Rice has seemingly done everything in his power in the last 18 months to prove he’s as box-to-box as they come. He’s done a very fine job of it.

Wolves: Max Kilman
Pedro Neto may well have asserted himself as the best of that group of very good forward players and be linked with bigger and better clubs had injury not ruled him out for much of the season, but for now Bruno Lage has got the luxury of a squad full of players right on the cusp of being too good for them – it’s perfect. But one they may struggle to keep hold of is Max Kilman, who is excellent with and without the ball as part of one of the Premier League’s meanest defences.