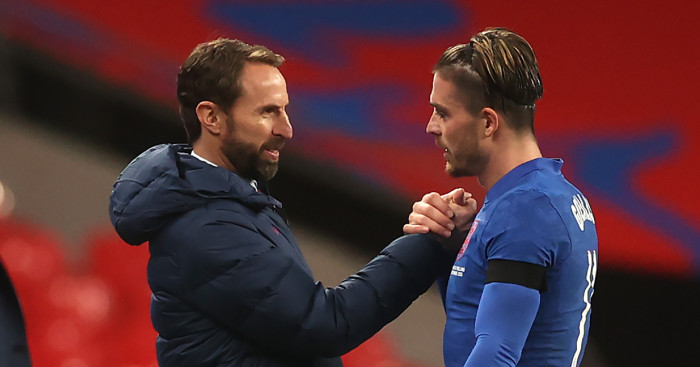 That was pretty straightforward really, wasn’t it? Even from an England perspective, the big result of the night didn’t come at Wembley, but here are some player ratings anyway.

Has had precious little to do in his England appearances to date, and nothing much changed for him tonight. Made a strong decisive punch from an early Ireland free-kick, but the offside flag was up anyway. A couple of dodgy clearances highlight the concerns over his distribution. Nevertheless, his half-time withdrawal means it’s four England caps now without a goal conceded. Can’t ask much more than that, really.

Two key interventions in quick succession when moving adroitly infield to cover his centre-backs who had been dragged across by Saka getting stranded upfield. But nowhere near as impressive or involved as he was against Denmark. Having been the one bright spot in that game he was perhaps the closest to a disappointment tonight. And that concludes his international break thanks to that red card he got after the final whistle against the Danes. Annoying.

A Not Quite performance from Saka. Was involved a lot, which is good and didn’t do much particularly wrong. But at key moments often didn’t get things quite right either. Missed a glorious chance due to refusal to use his right foot after being delightfully played in by a backheel from <checks notes> Tyrone Mings. Won the penalty for the third goal, though, and was definitely better in the second half. Potentially a big, big winner if this 3-4-3 is here to stay but a bit more end product would have been nice today if we’re being greedy.

A very pleasant evening for England’s defence, for the most part, and Keane’s renaissance this season was never under any threat here.

Made captain for the night which was an interesting flex from Southgate if you’re the sort of person who thinks the identity of football captains matters. Flew into wild and unnecessary early tackle having wandered 30 yards out of position in ominous echo of his last England appearance. Didn’t cover himself in glory during a brief but alarming spell when Ireland fizzed about half-a-dozen crosses into England’s box. Then he put headed the opening goal. REDEMPTION. Absolutely fine after that to widespread relief.

Don't wish to be a contrarian, but I don't think every goal scored by a captain is necessarily "a captain's goal"

Again, the opposition provide an inevitable caveat, but bang tidy once again in an England shirt and that little backheel to set Saka away was absolute sauce. He’s on the plane as things stand. Or the coach to Wembley. Depends where England are playing. He’s in the squad, is what we’re saying here.

Quality of opposition notwithstanding, England’s 3-4-3 looked far less stifling with a genuinely progressive player in the central midfield two. Linked up nicely and frequently with Grealish, which should dispel once and for all the notion that they are in any way competing for the same spot and maybe everyone can dial down the spittle-flecked hatred that Mount inexplicably generates.

Neat and tidy from Mr Neat-and-Tidy. Nice assist for the first goal. Nice. It was a nice performance. Which is nice. International football definitely suits him, and he appeared to be enjoying himself after a tough season thus far at Spurs, where he has slipped down the pecking order a touch with the arrival of Pierre-Emile Hojbjerg and reintegration of Tanguy Ndombele.

“A very dapper character who is very interested in the latest fashions,” Partridged ITV commentator Sam Matterface, with a weirdly accusatory tone, who proceeded to make some further allusion to the fact Calvert-Lewin is a known clothes-wearer at every opportunity. It was odd. Especially as Calvert-Lewin was in the process of having another very good game in a very good season. Also very interested in making life difficult for defenders, which he did throughout. At the start of this season, the second striker in what looks sure to be a two-striker squad was a wide open position. At the moment it isn’t, despite the sudden appearance of multiple options. A big tick for DCL is that he is the most overtly Harry Kaney of England’s other striker options, meaning he is an ideal understudy for a player who, let’s be real, nobody is displacing any time soon. The penalty was very Kaney, and his withdrawal moments later smacked of a manager acknowledging a job well done.

Peripheral until given the freedom of the Ireland penalty area when nicely played in by Grealish and cordially invited to stick the ball in the bottom corner, an invitation he gratefully accepted. Far more involved from then on, with the intelligence of his runs offering plenty more chances for Grealish to flex his creative muscles. Had been a slightly worrying length of time since his last decent game for England, so this was a welcome if low-key return.

Withdrawn after an hour that further strengthened his case. We’re taking the fact he didn’t get the full 90 as a big positive. If we’re going to nit-pick – and Grealish’s play is at a level now where you feel you must – he had a couple of opportunities to shoot where he instead chose to attempt something more complex and intricate. But that really is harsh. He’s a joy to watch, and England, a team with a tendency towards the drab recently, are far more fun when he’s around.

He’ll remember his England debut. Nobody else will. Which isn’t a criticism.

A combination of England’s game-killing third goal and the subsequent flurry of substitutes rather drained away whatever life there was in the game, making it hard for the substitutes to make much of an impression. Foden will, you suspect, just be glad to be back off the naughty step and on the pitch.

Got into a couple of decent crossing positions out on the right without fully capitalising. Busy and involved, though, in a game that had slowed down to such an extent that you suspected even those actually playing in it were by now more interested in the Scotland game.

Became England’s third youngest international when winning a first cap with 15 minutes remaining. Will get many more. Not his fault England are short of options.

Mark Smith and Sarah Winterburn look ahead to the rest of the international break, everyone’s favourite time of the year. Features more on Jude Bellingham