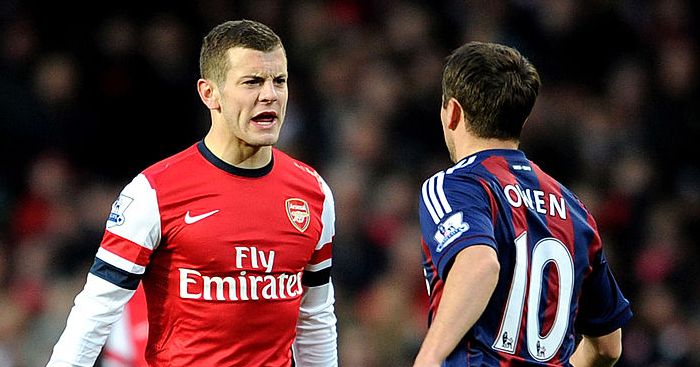 Michael Owen stunned Arsenal in the FA Cup final on this day 19 years ago. Oh, what could have been…

10) Jack Wilshere
“If he had a career that had been injury-free we would already be talking about him as one of the top central midfield players in Europe,” said Xavi in November 2015. Coming from the most recent Champions League-winning captain, it would ordinarily have been the highest possible praise. But in the case of Jack Wilshere, it was the latest in a long line of vague platitudes based on a frustratingly intangible alternate reality.

“I have played against him, I have watched him carefully, and if he can overcome injuries, then he can still go on and be one of the best midfield players in the world,” Xavi continued, referencing a teenage Wilshere’s breakthrough performance against Barca in February 2011. That came in the one season in which the Englishman started more than half Arsenal’s games. He was at the Emirates for a decade.

Spells with Bournemouth and West Ham have been similarly lost to the ether of physical frailty. A tentative count puts the amount of first-team club games he has missed at 216, compared to his 254 career appearances. At 28, there is still time to close that gap while wondering what might have been.

9) Marco Reus
Have either Borussia Dortmund or Germany ever seen the absolute best of Marco Reus? A forward who missed both the 2014 World Cup and 2016 Euros through injury was forced to watch the only major trophy of his career lifted from the sidelines. He partially tore his anterior cruciate ligament in the final of the 2017 DFB-Pokal and was removed at half-time of Dortmund’s 2-1 win over Frankfurt.

“I would give all my money away to be fit to be able to do my job, to do what I love,” was his heartbreaking lament in October 2017. It seems weird that Reus’s highest-scoring Bundesliga season remains the campaign before he moved to the Westfalenstadion, setting a marker of 18 at Borussia Monchengladbach that he has all too literally strained to reach since.

8) Norman Whiteside
It must be a trick of the mind that Norman Whiteside was born after Ian Wright and Gary McAllister. While those two beloved sons of the game managed to stretch their playing careers through to the new millennium, the youngest scorer in both FA and League Cup final history feels like a remnant of a bygone era after barely dragging himself into the 1990s before calling it a day.

Less than ten years after setting an unbroken record of youngest player to appear at a World Cup, Whiteside had hung up his boots. His issues had become so prevalent that Alex Ferguson, who once described him as ‘close to the genius category’, sold him to Everton in 1989. It was an unpopular decision with the support but one proved prescient by his retirement three years later.

Whiteside suffered from knee and pelvis problems throughout his transitory career. He attributed most of his struggles to famed Glentoran physiotherapist Bobby McGregor, who “set about me as I lay on that table like Giant Haystacks kneading sausage meat” to treat a minor groin strain at the age of 15.

7) Arjen Robben
It would be more accurate to suggest that Arjen Robben achieved brilliance in spite of his afflictions rather than being wholly inhibited by them. The Dutchman survived a full World Cup final and lasted long enough in a Champions League final to score the winner in the penultimate minute. The man of glass shattered any pretence of fragility when it came to the biggest stages.

But the point remains: only once in his entire career did Robben register 30 league appearances or more in a season. That came in 2002/03, when the teenage PSV winger’s only genuine physical weakness was a suspect hairline. His problems really – and quite literally – kicked in at Chelsea, when a broken foot delayed his debut until November 2004 and his final year included 24 starts in a 64-game campaign. It was presumably during his intermittent periods in rehabilitation that he mastered the art of cutting in from the right and curling one in with his left by using training-ground dummies. Poor Glen Johnson.

6) Just Fontaine
A player whose forename implies italicised incredulity and inflection, Just Fontaine was anything but. He scored more goals than he played games in both the World (13 in six) and European Cups (ten in eight), falling to Pele’s Brazil in the semi-final of the former and Alfredo di Stefano’s Real Madrid in the final of the latter.

Fontaine played in only one World Cup, while he could not prevent Burnley disposing of Stade Reims in his second and last European Cup campaign in 1960. It was earlier that year that he suffered a double-leg fracture from which he would never properly recover, retiring a month before his 29th birthday in 1962. Perhaps, considering the fact his opportunity to stun the globe with France four years prior only presented itself because of a pre-tournament injury to first-choice striker Rene Bliard, it was a fitting if unfortunate end.

5) Kaka
It might well have been the weight of expectation that took its toll on Kaka. Six seasons of almost constant and mesmerising football at AC Milan were followed by four campaigns of inconsistency and irritation at Real Madrid. The perpetual dream became a recurring nightmare.

In 2018, Kaka explained his problems at the Bernabeu upon his world-record move almost a decade earlier: “A lack of consistency – firstly due to injuries and then because of the coach.” A player who had missed an average of just over five games a campaign in Italy found himself on the sidelines for 16.75 games per season in Spain. For once, you could see Jose Mourinho’s point.

4) Sebastian Deisler
By the time of Sebastian Deisler’s premature retirement, the midfield artist formerly known as Das Supertalent had undergone five separate major knee surgeries, a series of subsequent muscle problems and two bouts of clinical depression. “He is one of the best players Germany has ever produced and therefore it is so difficult to comprehend,” said Bayern Munich legend Uli Hoeness, who himself had retired at 27 in 1979 due to knee problems. History had repeated itself.

Deisler did force something of a period of introspection in Germany. “My misfortune was being singled out after the 1998 World Cup,” he later recalled, adding that “all eyes were on me” after Die Mannschaft’s global failure in France. A nation typically reserved and restrained in its praise placed Deisler on an unnecessary pedestal and spent most of the intervening ten years wondering why he kept falling off.

He left Borussia Monchengladbach as a teenager, but not before manager Friedel Rausch insisted “he will be mentioned in the same breath as Walter, Seeler and Beckenbauer”. Similarly unhelpful comparisons with David Beckham followed as England watched a familiar story unfold in the most unlikely of places. A move to Bayern Munich was perhaps the worst possible decision in hindsight; the serious knee injury suffered shortly before the move combined with the immense media pressure to create an impossible battle. Deisler ended his career on 135 Bundesliga appearances and 36 Germany caps, having helped his country learn one crucial lesson in empathy.

3) Michael Owen
Sublime footwork and an excellent through ball from Steve McManaman created the chance. The score was 0-0, 25 minutes had been played and Michael Owen was in a race with Gunnar Halle that he could not possibly lose. Then it happened. As his left leg thundered into the Elland Road turf, he suddenly lost his balance, tumbled and clutched his right. His hamstring had torn.

It is the injury Owen claims “compromised” the rest of his career. That in itself is remarkable, given he won the Ballon d’Or two years later. But that explosive pace and power had been lost and a potentially generational talent was irrevocably changed.

“I basically run on two hamstrings on my right leg and three on the other,” he later said in 2012. Given it was suffered in April, surgery was never completed as Liverpool instead decided upon a period of summer rehabilitation, from which Gerard Houllier rushed his goalscoring threat back too soon. As his uninjured leg inevitably had more power, the other attempted to compensate and groin, calf and knee problems started to accumulate. By 26, his time at the top was effectively over.

2) Marco van Basten
It was not until the eve of 1994 World Cup that tackles from behind or with studs showing was made punishable by a straight red card. “When we see how the careers of great soccer players have been destroyed by attacks from behind, sporting ethics forced us to counter this,″ said head of FIFA’s medical committee Michel D’Hooghe. ″Marco van Basten is the most famous victim of such sabotage but, unfortunately, only one of many,” added Sepp Blatter.

The desperation of the football media to give everything a nickname led to it briefly being coined ‘the Van Basten law’. But for the sport itself to cite one specific case as a reason for enforcing widespread change spoke volumes.

The iconic Van Basten had been surprisingly called up by the Netherlands but was forced to miss the tournament in the United States by AC Milan, who rather understandably suggested it would ruin his rehabilitation from an ankle injury inflicted by Basile Boli in the 1993 Champions League final. That would prove to be his final game for club and country, with knee issues also keeping him out. That he retired at 28 and still only Lionel Messi and Cristiano Ronaldo can lay claim to more Ballons d’Or than his three is remarkable.

1) Ronaldo
What could have been? What still, somehow, was. Ronaldo had started nine Serie A games for Inter Milan between rupturing a tendon in his knee against Lecce in November 1999 and scoring two goals for Brazil in the 2002 World Cup final. In between, a sickening injury in the first leg of the 2000 Coppa Italia final which, realistically, could have ended his career.

It was only at Barcelona, where the Brazilian reached his absolute physical peak, that Ronaldo managed to avoid the problems that would plague him from his time as a teenager at PSV to those infuriating years at Real Madrid and AC Milan. When you think that he scored 47 goals in 49 games during that one ridiculous season at the Nou Camp under Bobby Robson, it is impossible not to wonder whether he could have been the greatest of all time, had his body allowed it.