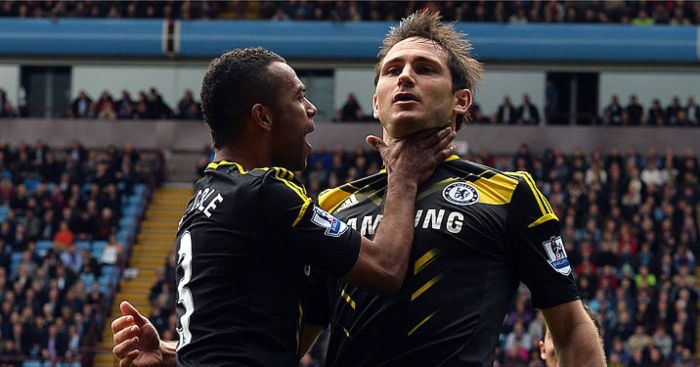 After Harry Kane hinted at the possibility of one day leaving Tottenham in the same interview he described their lack of trophies as “hard to take”, it seems apt to consider those who have abandoned their childhood dreams in search of silverware.

To qualify, the players must have left the team they supported as a boy. That rules out Michael Owen, Steve McManaman and Robbie Fowler, all of whom were fans of Everton when they were younger, as well as Robbie Keane, boyhood association football enthusiast. And they don’t necessarily have to have won trophies upon their move – the pursuit of them has to have been a key factor in their decision to leave.

10) Gary Lineker (Leicester to Everton)
The story of Gary Lineker might actually be one of the most relevant to Kane despite it beginning almost four decades ago. The striker was Leicester’s top goalscorer for four consecutive seasons from his first-team breakthrough in 1981 to his eventual departure in 1985, during which time the Foxes flitted between the top flight and second tier with no sign of genuine progress.

By the time Everton came calling a year before he would claim the World Cup Golden Boot in Mexico, Lineker had long outgrown his boyhood club. He left Filbert Street as joint top scorer of the entire First Division. That he shared that honour with Kerry Dixon of sixth-placed Chelsea while Leicester were mired in 15th told its own story.

9) Frank Lampard (West Ham to Chelsea)
The affection undoubtedly faded due to a tumultuous relationship with the fans. Frank Lampard himself recalled contemplating “jacking in football altogether” when a section of the West Ham support cheered and applauded him being stretchered off with a broken leg in 1997. There were regular and predictable accusations of favouritism, too. But he was automatically prescribed a childhood of bubble-blowing thanks to his family’s affiliation with Upton Park.

Lampard the elder was still not his boy’s idol, of course. The midfielder was seven when his father left Upton Park, and so instead he became enamoured with “larger than life” striker Frank McAvennie; Lampard seems unlikely to ever want to emulate the Scot’s two spells in east London.

8) Teddy Sheringham (Tottenham to Manchester United)
Admitting himself “that situation” does get “misconstrued at times”, Teddy Sheringham aimed to clear up the confusion in May 2017. “I supported the Club as a kid,” he told the official West Ham website and their ludicrous capitalisation. “Then when I started playing for Tottenham as a schoolboy, they would give us free tickets for matches and my support for them obviously developed.”

Here is a story involving Sheringham as a Tottenham schoolboy that you must read, by the way.

The striker actually left Spurs twice, and you can hardly argue with either decision. He departed in 1997 to join Manchester United and become a Treble winner, returned in 2001 to pick up largely where he left off, then stretched his top-flight career out at Portsmouth and finally the Hammers. It was at the former where he became the oldest player to ever score three goals in a Premier League game, otherwise known as the gerihat-trick.

7) Andy Carroll (Newcastle to Liverpool)
If Andy Carroll could turn back the clock to January 2011 he would surely have stuck instead of twisting through almost a decade away from his spiritual home. “Playing for your boyhood team and going away, you realise what you had and missed,” he said upon his return last summer. “Coming back it’s something only dreams are made of.”

Yet mystery still shrouds his initial departure. The editor of the club’s leading independent fanzine The Mag struggled to understand why someone “in the position of being number nine for your boyhood club” had chosen to leave when that record move to Liverpool became public knowledge. But Steve Wraith, who helped run competitor ToonTalk, revealed a text conversation with Carroll in which the striker said he was “gutted” to be “kind of pushed out the door” and that “I was practically told to go”.

Those claims were later reiterated to the Evening Chronicle, to whom he explained he “was pushed into a corner and had no choice” as “the owner…wanted the money” and “made it clear to me that I was not wanted at the club”. And that does not sound at all like the benevolent Mike Ashley.

Alan Pardew attempted some mitigation soon afterwards, suggesting Carroll had handed in a transfer request after being told he would not be given a new contract three months after signing his last one. Fans chose to side with either player or club, but with the move too late for the £35m to be reinvested, everyone was made to look like a mug of the Sports Direct variety.

6) Alan Smith (Leeds to Manchester United)
The tribalistic nature of football can make perspective elusive. Fans are either not offered the chance to see the wider picture or they simply refuse, and the media can and will feed into that frenzy to help shape the narrative. So when Alan Smith named Manchester United as the team he would never play for before joining them two years later, he will only ever be depicted as some sort of traitor.

It took board member and club legend Peter Lorimer five years to properly frame the move. Leeds had finally been relegated so interest in their most desirable remaining asset was inevitable. But of Newcastle, Middlesbrough, Everton and United, only their most bitter rivals could afford to pay the entire £7m transfer fee up front.

“The club was in such dire straits we needed the money there and then,” Lorimer said in 2009. “The club led him down that line. As far as the club is concerned, Alan Smith going there probably saved us from going into administration or liquidation a lot earlier than we did.” The Rothwell boy sacrificed his reputation to keep his club on life support.

5) Sol Campbell (Tottenham to Arsenal)
It’s strange to think of Sol Campbell having a boyhood club. It’s bizarre really, to consider that he ever was a boy at all. If anyone came into this world with the sort of self-aggrandising, referring to oneself in third person, Tory level of self-importance, it would be Sulzeer.

Campbell’s path at Tottenham was not smooth. It incorporated a goalscoring debut under Doug Livermore in December 1992, after which he did not play again that season. Then came Osvaldo Ardiles, who used him as cover at right and left-back for the injured Justin Edinburgh and Dean Austin. He was appointed club captain by Gerry Francis but clashed with Christian Gross and George Graham, both of which seem fair.

But as his contract was to expire in summer 2001, he was so blatantly the settler in the relationship to Tottenham’s reachers. Aware of a need to play Champions League football, further his international career and sate his appetite for trophies, he sought to leave. And he bloody well picked his next destination carefully.

4) Glenn Hoddle (Tottenham to Monaco)
“I’m so glad that I’m still around to see this,” said Glenn Hoddle. “I’ve been a Spurs fan since I was eight years of age, what a proud moment that was.”

Seven months after suffering a heart attack, the 61-year-old had finally witnessed his club reach a European Cup final. Hoddle himself had missed Tottenham’s 1984 UEFA Cup win due to fitness concerns so watching last year’s Amsterdam miracle was a glorious catharsis.

The inability to replicate such success on the continent was partially behind his reason to leave north London 17 years after joining the Tottenham youth system. At 29 and approaching the end of his playing career, Monaco offered two things no English club could in 1987: European competition and a greater appreciation for his expressive playing style. With nothing more to prove on these shores, he blazed a trail across the Channel.

3) Rio Ferdinand (West Ham to Leeds)
How different things might have been. In their search for a new centre-half, Manchester United moved for Markus Babbel, Brazil international Celio Silva and Chilean trialist Dante Poli in summer 1997, with an inquiry over the teenage Rio Ferdinand being rejected outright by West Ham. They would go for Henning Berg of Blackburn instead.

Ferdinand made his way to Old Trafford five years later, but it was Leeds who tempted him away from his home at Upton Park. The Whites were just one place above West Ham in the Premier League in November 2000 but their plans were grander and their future seemingly brighter.

As Harry Redknapp tells it, West Ham chairman Terry Brown snatched at the £18million offer – a world record for a defender – as he “thought that we would never see transfer fees again”. It was in a haze of Bosman panic that the steady exodus of prodigious Hammers started.

2) Ashley Cole (Arsenal to Chelsea)
There are a few irrefutable truths regarding Ashley Cole. First, he was England’s greatest left-back. In a related point, he deserves far more appreciation. He also became a pioneer for social distancing at Roma. And he handled his Arsenal departure woefully.

The “trembling with anger” quote in his autobiography, in which he reveals he almost swerved his car off the road at being offered just £55,000 by the Gunners to stay, did and does not reflect well. But context offers a vague defence: Arsenal had promised a £60,000-a-week wage that still fell short of their top earners, before deciding to haggle and, rather sensibly, focus on trying to keep Thierry Henry.

Cole’s most damning quote came a year before his move. “I won’t sign for another Premiership club because I can’t imagine myself playing against Arsenal,” he said in summer 2005, a matter of months after that fateful meeting with Jose Mourinho and Peter Kenyon in a London hotel. “I would only want to play abroad.”

He did, to be fair. But only after spending eight years at Chelsea.

1) Wayne Rooney (Everton to Manchester United)
It was after opening the scoring in an eventual 4-1 defeat to Aston Villa in the first leg of the 2002 FA Youth Cup final that Wayne Rooney lifted his shirt to reveal the message scrawled on a t-shirt underneath.

He would become a red little over two years later. In truth, his stay at Goodison Park was longer than most anticipated. His time in the Everton first team was spent under a constant spotlight with persistent questions over his future, and the Toffees finished 17th in his final campaign. Combined with a starring performance at Euro 2004 that summer, it would not have been possible to keep him.

Manchester United pipped Newcastle in the ensuing bidding war, and Rooney returned to Merseyside a rather different player 13 years later, his grasp of apostrophe usage having considerably improved.