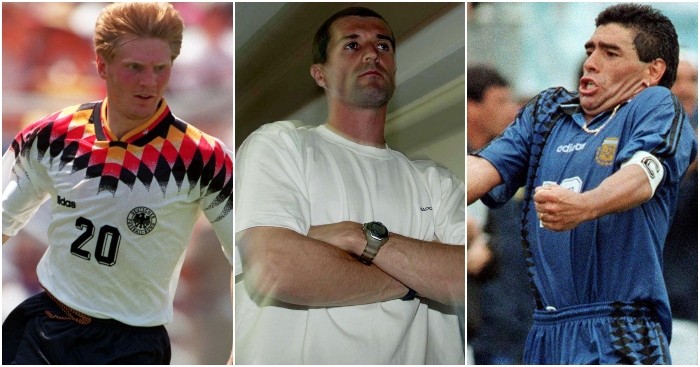 Andre Onana is said to have been sent packing from the Cameroon squad. He’s in illustrious company when it comes to leaving a World Cup in disgrace…

Cameroon keeper Onana reportedly fell out with coach Rigobert Song after being asked to tweak his style of play. The Inter Milan star refused, so off he goes back home. Here are five other big names to have returned from World Cups on an earlier flight than their team-mates…

Diego Maradona
The news that Maradona had failed a drugs test was shocking but not in the least bit surprising. The Argentina genius had plenty of form for dabbling in illegal substances and rumours abounded before the World Cup in 1994 that FIFA were willing to look the other way so as not to deprive their showpiece of one of its leading stars.

Not so, it would seem. After scoring in a 4-0 win over Greece in Argentina’s opening game and celebrating in such a manner which must have only heightened suspicions, Maradona next took on Nigeria. Argentina won 2-1 but Maradona left the stage hand in hand with a medic who had been tasked with taking his sample.

Four days later, the party was over. “Both analyses of the urine sample have proved positive,” said whiter-than-white Sepp Blatter. “The player Diego Maradona of the Argentinian national team has therefore violated the conditions of the doping control regulations, in the match Argentina versus Nigeria.”

Maradona later put the positive test down to an energy drink but he was bang to rights. “Maradona must have taken a cocktail of drugs because the five identified substances are not found in one medicine,” said Michel d’Hooghe, a doctor and a member of FIFA’s executive committee.

“They have retired me from soccer. I don’t think I want another revenge, my soul is broken,” said Maradona as he prepared to fly home. On a plane. Though with that amount of ephedrine in his system, perhaps the aircraft was an unnecessary touch.

Steffan Effenberg
The Germany midfielder was also told to pack his bags in 1994 after flipping the bird to 64,000 fans inside the sweltering Cotton Bowl in Dallas, where the defending World champions were labouring to a 3-2 win over South Korea.

For coach Berti Vogts, der Stinkefinger “was the last straw” where Effenberg was concerned. “I will not allow a player to make an obscene gesture like that to the crowd. As far as I am concerned Effenberg is over as an international player. He has done too much in recent years.”

Effenberg was never likely to take his punishment lying down, even if he seemed conflicted by his own behaviour. “The way the coach reacted was ridiculous,” he said in response to Vogts. “I have talked to some of the players and they don’t understand why I have to go. I overreacted. I don’t regret it. But when I look back I am sorry. But it was 50 degrees celsius. I was playing for Germany at the World Cup for a place in the second round.”

Thomas Helmer was presumably one of the team-mates Effenberg consulted. “The team was surprised,” said Helmer. “It has been hit by all this and we are sorry. The feeling was that he should have been allowed to stay. All the players said he was wrong to do what he did. But there are different views about the severity of the penalty.”

The Germany team weren’t far behind Effenberg in returning home. Vogts side were beaten by Bulgaria in the quarter-finals and Effenberg had to wait four years for another cap – he only earned two more – while sitting out the Euro ’96 triumph.

Nicolas Anelka
The France striker enjoyed even greater support from his team-mates than Effenburg. The entire squad was willing to shut itself on a bus in an effort to embarrass Raymond Domenech, which they certainly achieved. The sight of the beleaguered coach reading out a statement from his dissenting players, like a hostage reciting his lines to camera, was perhaps the most pathetic episode in a series of national disgraces. But justice was to find the players eventually, with Anelka being served his dose first.

The centre-forward was booted out of the squad after refusing to apologise for reportedly telling Domenech to “go f**k yourself, you son of a whore” after the coach had dared to criticise Anelka during half-time of the second group game against Mexico, which France would go on to lose.

The decision did not go down well with Anelka’s team-mates. While the rest of the squad refused to train, or even get off the bus to explain why, Domenech did their dirty work for them.

The coach read the players’ statement: “We regret the incident at half-time of the France v Mexico match, but we regret even more the divulging of an event which was only the squad’s business and was part and parcel of the life of a top-level team.

“The FFF did not at any point try to protect the squad. It took a decision based solely on facts reported by the press, without consulting the players.”

For his part in the shambles, Anelka received an 18-match ban from the FFF, a sanction he considered to have “no relevance whatsoever” because he had no intention of returning to the international scene.

“These people are clowns,” he said. “I’m dying with laughter.”

Roy Keane
Did he jump or was he pushed? To this day, there remains some mystery over exactly how the 2002 World Cup campaign was brought to a stunning and premature end for Keane. Some say the Republic of Ireland captain stormed out; Keane himself claims he was ambushed in a team meeting by Mick McCarthy who had grown tired of his skipper’s moaning about, among many things, training pitches and training kit. One thing, though, is for certain: ‘Stick it up yer bollocks’ remains an unrivalled classic of its genre.

And there was plenty more where that came from. Niall Quinn, one of the few players present that day willing to recall the horror of that Saipan meeting room, described the furious precision of Keane as “the most surgical slaughtering anyone has ever got”.

And with that, Keane was off to the airport and home to walk the back legs off poor Triggs.

Nikola Kalinic
The former Blackburn striker was sent home from Croatia’s World Cup squad in 2018 – but he probably wasn’t all that arsed.

Kalinic, by then a 10-year veteran for his national team, was to serve as Mario Mandzukic’s back-up in Zlatko Dalic’s squad. But when he was instructed to replace the leading man while Croatia led 2-0 against Nigeria in their opening game, according to Dalic, Kalinic didn’t fancy it.

“During the Nigeria encounter, Kalinic was warming up and was supposed to come on in the second half. However, he then stated that he wasn’t ready to come on due to a back issue. The same thing happened during the Brazil friendly in England, as well as before the practice session on Sunday.

“I have calmly accepted that, and since I need my players fit and ready to play, I have made this decision.”

The decision was to send Kalinic packing and Croatia, who went on to reach the final, managed just fine without the striker. At least he had the good grace to refuse a silver medal when it was inexplicably offered to him: “Thanks for the medal, but I did not play in Russia.”