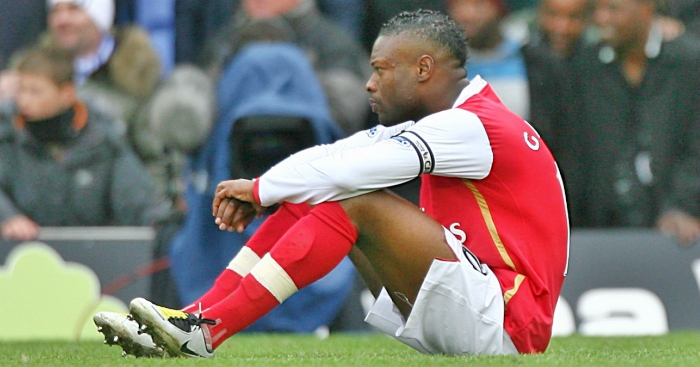 Arsenal players all ‘shook our heads’ when William Gallas was made club captain, according to Jens Lehmann.

Gallas was appointed Arsenal captain at the start of the 2007/08 season, and fulfilled the role until November 2008.

The Frenchman’s time as skipper was ill-fated, the lasting memory being him throwing a strop after a 2-2 draw with Birmingham in February 2008.

In his upcoming autobiography, serialised exclusively by the Daily Telegraph, Lehmann discusses how the Arsenal players reacted.

‘Having William Gallas head the team in the 2007/08 season was problematic,’ he writes. ‘We had learned of his appointment in the papers and we all shook our heads. The previous season he had repeatedly turned up very late for training or had left the training ground without permission.

‘With the promotion, Wenger apparently wanted to appeal to Gallas’s sense of responsibility, trying to turn him from Saul to Paul. Initially, this went successfully, until Gallas once briefly lost his nerve.

‘We were due to play Birmingham away in February, and Arsène took me out of goal again. Downstairs in the conference room, the boss informed me about my renewed banishment. “Jens, I know you’ve been playing well and are looking fresh and sharp on the pitch again. But I need to give Manuel Almunia a chance; it’s what you, too, would expect me to do after an injury.”

‘He was making a mistake, I retorted, as now, during the final sprint for the title, he would need experience on the team, and Manuel was playing his first proper season at this level. He had been playing very well, but when a player starts playing at top level this late, he struggles to lead others in big games. The player focuses on himself and his performance, but is unable to support the others in a difficult situation.

‘Wenger ended the dispute with the words, “If he plays poorly, you’re back in,” followed by a chat about private things and my future. This was how we interacted: we would argue, but only on a professional level. As soon as the conversation swerved towards things aside from football, it became harmonious and relaxed.

‘The game the next day was fateful: after only three minutes, Birmingham centre-back Martin Taylor shattered Eduardo da Silva’s ankle with a tackle. We were all shocked, but were leading 2–1 shortly before the end, when Gaël Clichy was late for a ball while in his own area. His opponent fiddled the ball around him and then went down – time for a penalty and time for captain Gallas to spring into action.

‘Instead of standing at the edge of the area and clearing a possibly parried penalty like any other defender in the world, he abandoned the team, ran towards the halfway line and, in his anger, kicked an advertising hoarding.

‘After the match, which eventually ended 2-2 thanks to the converted penalty, he refused to leave the pitch but sat down in the centre circle like a sulky child, until the manager himself came to collect him.

‘In the dressing room, Gallas came to blows with Gilberto, who accused him of seeking attention in a daft manner – the row dragged on for the remainder of the season. Finally, it contributed to us finishing only third, four points behind Manchester United, despite having been six points ahead in March.’