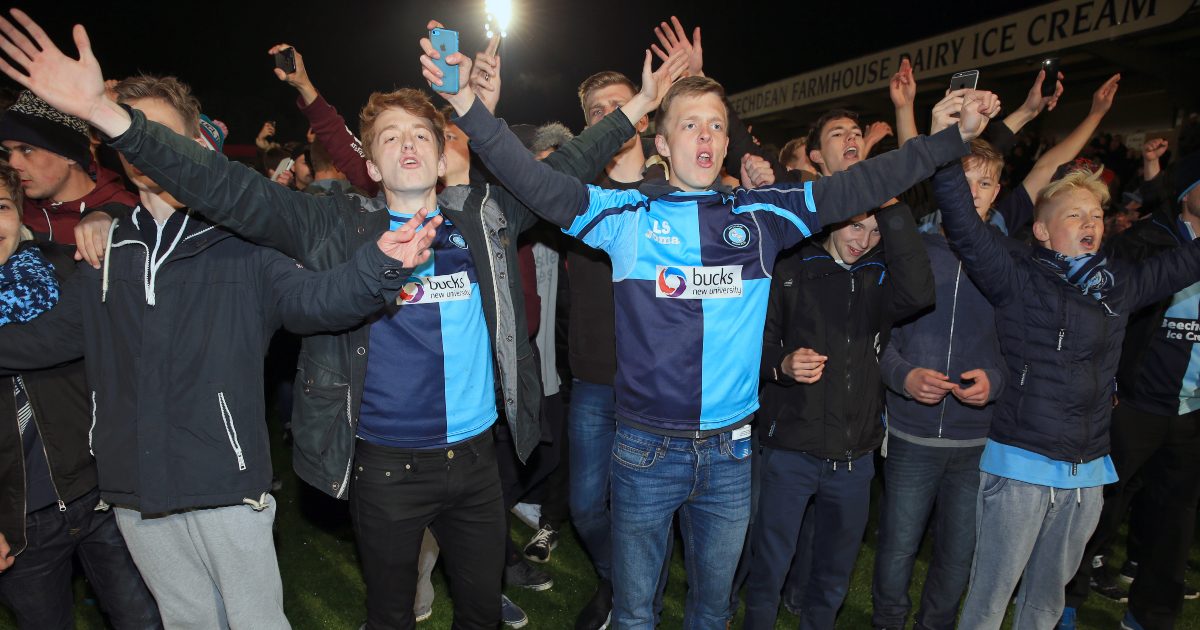 As part of a series about odd rivalries, we take a look at Wycombe v Plymouth. If you missed Gillingham v Swindon, go here…

How far apart are these clubs?
In short, a very long way apart. But according to our editors, that’s not enough. So, a one-way trip from low Plymouth to High Wycombe will cost you three hours and 41 minutes of your life in a car alongside the M5 and M4, offering some lovely descending motorway action. If you have the best part of a week to spare however, you could walk from one town to the other and back; remember that for the next half-term holiday, parents.

Conversely, if you have just a day to spare, you could bike from the Devon dockyards to Adams Park and use the remaining four hours of the day to catch a train back. That’s a multitude of ways to cover roughly 220 miles – or 440 if you actually want to return home – of southern English land. So yeah, in sort, a very long way apart.

When it comes to football, these clubs are a little closer. Both are plying their trade in League One this season but are more used to meeting in the fourth tier of English football. Both have been promoted from League Two in recent years, while Wycombe’s return from their second-tier sojourn affords these two rivals a reunion in League One this season. But just why are they rivals? Shall we?

How and when did the rivalry begin?
Unlike the rivalry between Swindon and Gillingham covered in the first edition of Odd Rivalries, the needle between Plymouth and Wycombe does not root itself in decades worth of bitterness and anger and instead stems from much more recent ill-feeling. In essence, the match which preceded this quite remarkable full-time tweet from the Plymouth Argyle social media team is a good starting point.

Wycombe came here to waste time, niggle and get under our skin. They did it and they won. See you next week. #pafc #ArgvWyc

The replies alone are worth the entirety of your lunch break, but there is of course a story to such a social media post which broke all traditions of your usual post-defeat fare. This was a game that began with Gozie Ugwu’s third-minute opener and eventual winner and ended with a 46-year-old Barry Richardson keeping a clean sheet in his first professional appearance in over a decade was overshadowed by anger from the Plymouth contingent about Wycombe’s ‘time-wasting’ techniques.

That some of the anger could stem from the two sides meeting in the League Two play-off semi-finals is a reasonable suggestion, and the recency of that clash the season before may well have led to the bitterness on show, but January 30 2016 marks the true onset of the rivalry.

But back to 46-year-old Richardson, who played the majority of the match to earn his clean sheet, though had little else to do beside stand between the sticks after first-choice Alex Lynch was stretchered off to booing from swathes of home fans at Home Park and much derision and anger from then-Plymouth manager Derek Adams. That Lynch failed to recover from that injury for the Chairboys and at 26 is now retired from football having last played for Llandudno FC in 2018 suggests the Welshman was not wasting time.

What’s the most memorable moment from this rivalry?
The play-off semi-finals came before the rivalry really kicked off, while encounters since have comtained a lot of animosity between the fans, both in the ground and on social media, but it was the managers – Derek Adams, since of Morecambe and currently of Bradford City fame, and perennial Wycombe chief Gareth Ainsworth – who provided the most needle and lasting images to this rivalry.

If a picture speaks a thousand words, then let’s go for two thousand. Here and here…

Proof that Derek Adams losses matches v @wwfcofficial before kick-off. Too busy worrying about time wasting and “predictable” tactics. So predicable he can’t counter it and gets beaten every time! #Plymouth #wycombewanderers #PAFC #wwfc #WYCvPLY pic.twitter.com/zIW1QKObVI

One of the EFL’s most likeable managers in Ainsworth against one of its more, how shall we put this, less likeable managers, there is sure to be some middle ground on this than a tale of good versus bad. Adams may now be managing in West Yorkshire, but the images are everlasting, and he is seemingly one of the only men who can really get under Ainsworth’s skin. That alone makes every failed handshake between the two more memorable than the last.

A midweek in November will make for the perfect atmosphere to add renewed rivalry when the sides first meet at Home Park this season before the return fixture at Adams Park over the course of the Easter weekend. Very tasty, particularly if somebody new chooses to play Adams’/Plymouth social media account’s role of the bad egg.

Having only played each other 28 times with a ridiculously absurd balance of 10 Wycombe wins to nine Plymouth victories and a further nine draws, there is the potential to see the head-to-head mantle levelled entirely at 10-10-10 or for Plymouth to take the lead entirely.

What’s the future for this rivalry?
While much of the needle exists between the two managers from that clash, there is enough hatred and bitterness between the respective fanbases to see this rivalry continue for some time yet. Plymouth fans largely despair at Wycombe’s perceived ‘time wasting’ while Chairboys fans are reminded of their rage at the boos rained down upon Lynch in that game. There have been incidents since which prove there is enough to keep the beat alive; Bastille drummer and Argyle fan Chris Wood sparked Wycombe ire with comments made on a podcast last year.

Following a 1-0 defeat at Adams Park, Plymouth manager Adams’ post-match rant earned him a £5 book token from Wycombe fanzine ‘The Wanderer’ for angriest opposition manager. Legend has it they never got a thank you note in return.

A Wycombe fan living in Plymouth (@J0NNYKING) says both fans feel the rivalry, but it mostly comes from the Plymouth end, while Pilgrims would argue that it is with good reason considering the usually unflappable Ainsworth provoked Adams by refusing to shake his hand and squaring up to the now Bradford boss after the hotly contested rivalry.

The most enduring element of the rivalry comes from before the rivalry even began, and with those play-off semi-finals. With Wycombe 3-0 up in the first leg and the jubilant supporters singing ‘Three Little Birds’, the chorus was thrown back at them as Plymouth scored two in reply to leave the tie in the balance. Following second-leg victory for Ainsworth’s side, Wycombe fans picked up the mantle of the song again and continue to sing it to their distanced rivals to this day.

Many thanks to Jonny King and Tom Hancock for their help this week.