Home All The News Poch discusses planning with Alderweireld, Rose and Dembele 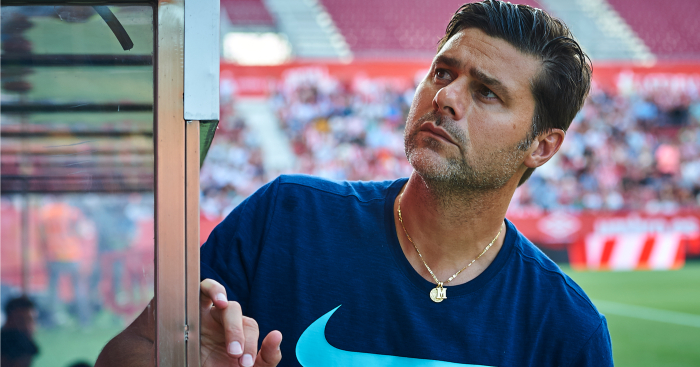 Boss Mauricio Pochettino will plan for Toby Alderweireld, Danny Rose and Mousa Dembele still being at Tottenham beyond the end of the month.

All three players have been linked with moves away from Spurs this summer, but time is running out if they are to join a foreign club, with the transfer window shutting next Friday.

Pochettino, who has said any player can leave if they don’t show full commitment to the cause, added that all three will get a chance to win a place in the team.

“I cannot work if I think they will not be here. Not only these names, different names can get an offer.

“You’re focused on different names, I’m focused on providing them with an opportunity to play.

“It’s my fifth year as manager. For me, we start from zero and give an opportunity for all players to play and perform and not think about the past or what will happen in the future.

“What happened yesterday is gone. And you can only change your future if you’re in the best condition. The most important thing is to be ready.”

Alderweireld has enjoyed the biggest integration back into Pochettino’s plans after he played 90 minutes against Fulham last week.

The Belgian defender appeared to be frozen out by his manager at the end of last season after contract talks hit an impasse, while Alderweireld’s international team-mate Dembele has also stalled on a new deal, but has featured off the bench twice.

That leaves England left-back Rose, who has fallen behind Ben Davies in the pecking order and looks the most likely to still leave, with Paris St Germain thought to be keen.

Pochettino said of Rose: “Look, I don’t want to talk about individuals who still don’t play.

“Be sure they’re in the squad and will have the opportunity to play. My decision is my decision.

“Maybe he’ll play on Monday. Or maybe not. You need to wait and see what happens.

“We talk a lot and anything I tell them, I tell in private and explain what I expect.

“If they want to ask me questions about football, or on the personal side as a human being, we are so open to helping them.”

Spurs head to Manchester United on Monday night hoping to end a run of four successive defeats there.

Pochettino was given an even bigger headache on Friday when it emerged club captain Hugo Lloris had been charged with drink driving.

It remains to be seen whether the Frenchman will be involved but Pochettino says his team are heading north with belief.

“We must believe. In football, if you don’t believe you lose before you arrive there,” he added.

“We’re confident – just like we were confident in the last four years. Trust in yourself and in your team, believe you can win – that’s always the most important.

“It’s important to arrive in the best condition. In our mind we need to go there and believe we can win.”