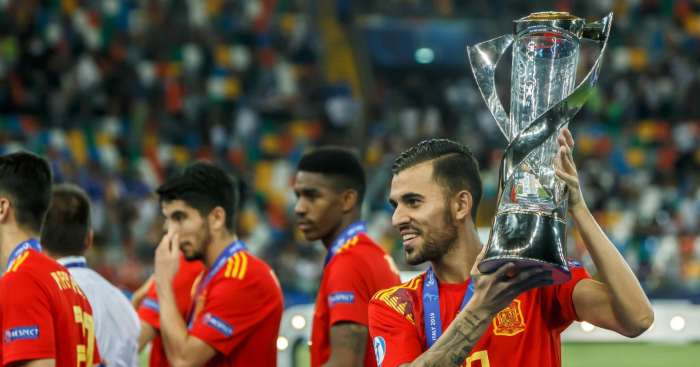 Liverpool‘s interest in Dani Ceballos has led Mauricio Pochettino to ask Tottenham chairman Daniel Levy to tie up a deal for the Real Madrid midfielder, according to reports.

Last month Ceballos admitted he had no intention of leaving Madrid on a permanent basis this summer, but he suggested he would be in favour of a loan move to get some game time ahead of next summer’s European Championships.

And there will be no shortage of takers for the 22-year-old, who grabbed two goals and two assists as Spain U21s won the European Championship tournament recently.

“I think [Zinedine] Zidane will have seen the tournament,” said Ceballos after Spain U21s’ win over Germany U21s in the final. “But we all know what he thinks.

“I would like to try out something new: next year, my goal is to play 40 games and play in the Euros.”

That has led to increased speculation that a switch to Tottenham could be in the offing, with reports in Spain now claiming the midfielder has now emerged as their No 1 transfer target.

According to Sport, Pochettino has urged Tottenham chief Levy to work on completing a deal for the Real Madrid star as a matter of urgency, with the Spaniard seen as a possible replacement for the unsettled Christian Eriksen.

And the issue of landing Ceballos appears to have become a more pressing issue, amid talk in Spain that Liverpool are also reported to be considering a move amid talk for the 22-year-old.

Sky Sports reported on Wednesday that Spurs are in talks over a move for the player and suggest “a short-term deal seems the most likely option at this stage also because of Ceballos’ high release clause” – currently set at a huge €500million.

And Ceballos himself dropped something of a cheeky hint he could be England-bound with teasing post on Instragam. His picture shows him at Universal Studios in Florida posing inside a classic red London phone booth.