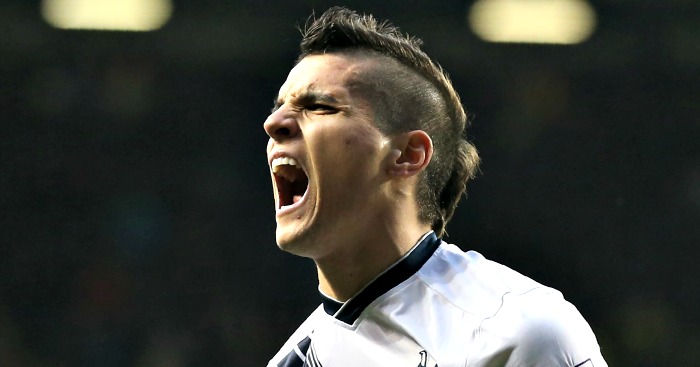 Mauricio Pochettino has suggested that Erik Lamela is closer than ever to returning for Tottenham.

Lamela has not featured for the club since picking up a hip injury in a League Cup game against Liverpool in October 2016.

There have been conflicting reports regarding the winger’s fitness since, but Pochettino says that he could be on the bench against West Brom on Saturday.

“We are waiting because now it’s on him to get the right feeling, to say ‘I am here to be available if you want gaffer’,” said the manager.

“He’s training, he’s doing well. Now after one year it’s about his feeling.

“I don’t know,” he replied when asked whether it was more likely that he would feature for the club’s Under-23s. “We have another training session tomorrow. We are waiting but maybe we decide yes to play him in the U23s.

“Tomorrow we need to wait, maybe in his mind he says: ‘Gaffer if you want, I am ready again to be available if you believe I can help the team.’

“We need to wait tomorrow and if it’s not like this then we decide maybe for him to play in the U23s. It’s true that we have a lot of games ahead now: Saturday, Tuesday and then the weekend again.

“We’ll see, we’ll see. I hope that it’s going well with him and his mind and he feels that confidence to be available again to play.”