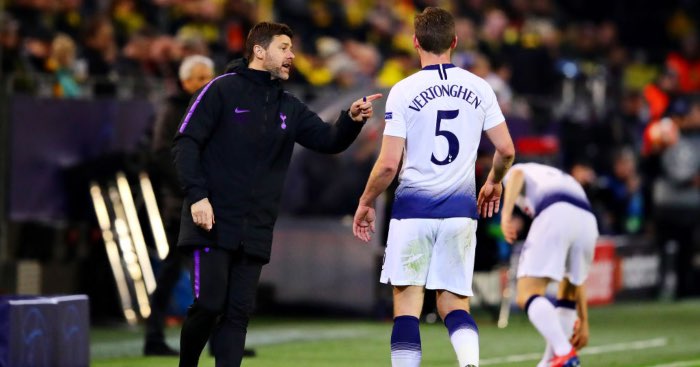 Tottenham boss Mauricio Pochettino has insisted Jan Vertonghen remains a part of his plans at Spurs as contract negotiations continue.

The Belgium international is in the last year of his current deal and a new one has yet to be agreed.

Vertonghen has always been one of Pochettino’s main men during the last six years and that has not changed.

“I am open to everything, but that is a dealing between the club, him and his agent,” Pochettino said.

“Let’s see what happens. Jan after five years that we are all together, is always an important part of my project.

“That feeling isn’t going to change.”

Vertonghen believes he can offer Tottenham a couple of more years at the top of the game as he searches for a new contract.

The 32-year-old reckons he has plenty to give, but would not confirm whether negotiations on a new contract are ongoing.

“I would prefer not to go too deep into that (contract talks), but there is always some movement,” he said, speaking ahead of Tuesday’s Champions League Group B clash with Bayern Munich.

“It is my eighth season here, I have had a great past and I am feeling great at the moment in every single way here, that is all I want to say about that.

“I am very aware of my age but my body is not because I am feeling good and I feel fairly young, it doesn’t distract me, I want to play as many games as I can at the highest level.

“I am very ambitious, I feel like I have a couple of good years left in me. I hope I can help the team for as long as I can.”

Vertonghen’s ability to perform at the highest level will be tested when Bayern visit.

But head coach Niko Kovac believes Tottenham’s development under Pochettino has made them a “positive light” of European football.

“It is a very, very positive development,” the Croatian said. “In 2016 I was here and they were in the old stadium, I was here to watch Tottenham against Swansea, the flair was different, the stadium was smaller, but the atmosphere was strong.

“You can see what it means when you have a good coach, a good manager.

“In my opinion Tottenham have a very positive light in European football, they are now able to compete with the very big teams, even if it didn’t look that way seven or eight years ago.

“They have continuity, he was given time and he has done a great job and that is an example for others.

“It is definitely going to be a game with level footing, when you look at the players from both teams they are all world class from different countries.”