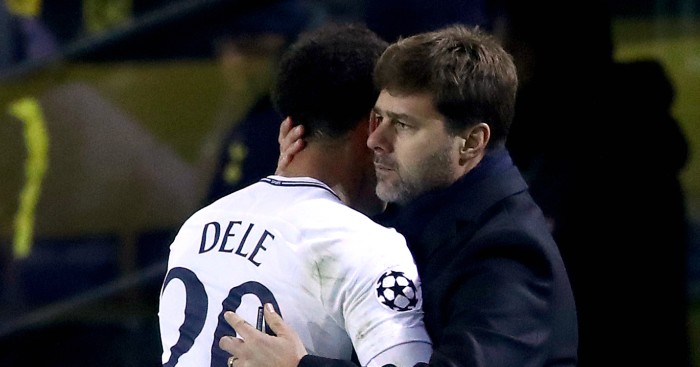 Former Tottenham boss Pochettino hailed England’s Alli as a star of rare quality, bracketing the 24-year-old alongside his compatriot Maradona.

Alli has fallen out of favour at Spurs under Jose Mourinho and faces an uncertain future in north London, while the former MK Dons midfielder proved an integral part of Pochettino’s success at the club.

While Pochettino refused to comment on Alli’s situation under Mourinho, the former Espanyol and Southampton manager did offer a bold comparison with Maradona, one of the sport’s all-time greats.

“The charisma is the best thing he has, when he walks into the room everyone watches him, everyone wants to touch him, wants to ask for a picture.

“His energy, you smell the energy, his charisma it’s amazing.

“And it’s similar in this way with Dele. People love him in this way.

“When you add the charisma to the talent, that’s what makes a special player.

“When he was scoring goals, kids loved him like he was Ronaldinho.

“My son was saying ‘inho, inho, inho’, he was not even two years old and could not really talk, but he had seen Ronaldinho dancing and he had the ball on the back of his neck, on the 7UP advert, with Fido Dido.

“Kids feel this charisma, this energy, and with Dele it’s happened the same; he has this charisma that kids love and follow.

“I’m not going to talk about the situation (for Alli) now, I need to be respectful with the current staff and coaches, it’s not my responsibility any more; you need to respect that.

“Dele was an amazing player for us; the hunger and the energy and the aggression.

“He was always on the edge of the line, so you needed to help him and tell him to be careful and take one step back.

“He’s still young, but I think we enjoyed a lot together, with all the team.

“We built a very special relationship with all the team.

“I hope that everything’s going well for everyone that’s there. My feelings are the best for him and for all the players.”