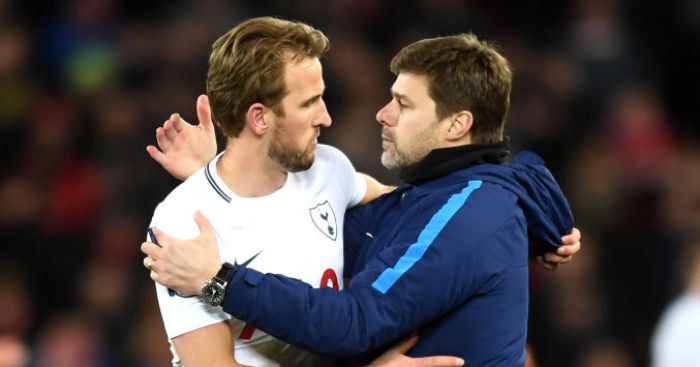 There’s a passage of play which, when it appears, reassures you that Tottenham are playing well. Harry Kane will receive the ball in a shallow left position, dragging defenders towards him, and then, with a touch and turn, he’ll fire a pass back across field into the stride of an advancing full-back.

It’s almost a set-piece in open play, a crafty mechanism to force a fracture and open up space. More often than not it’s very effective, too, creating at least a crossing opportunity and sometimes a scoring chance.

It’s designed around Kane. His goal-scoring record has afforded him the respect of his opponents – that creates the displacement – but it’s his touch which greases the move. He gets the ball out of his feet quickly and he rifles that switch away without even looking up.

When it comes off, the lights are on: he’s feeling good and playing well, the rest of the side is orbiting around him nicely.

The first time I saw Kane I had a crushing sense that he wouldn’t make it. He’d been a name around the club for a long time and there would be pictures of him scoring youth-team goals in the middle pages of the programme. But when he first appeared in all three dimensions, it was such a let-down. He had none of the gleam of a future star or even that of an athlete. No pace, no touch, no chance. Lee Barnard. Again.

It’s nonsense, of course, but most fans know how powerful a first impression is, particularly with academy scholars. From his first minutes on a Premier League pitch, for instance, nobody was in any doubt that Wayne Rooney was there to stay. Or Michael Owen. Or Raheem Sterling. Or Steven Gerrard. It’s not that those players were flawless at first sight, just that their talent and tools were are all so convincing. So obvious.

Kane wasn’t like that. Instead, he became more compelling over time, learning a new finish one month, adding a different kind of turn the next. His progress was more pragmatic. It’s an illusion; there’s years of hard work and sacrifice behind every great career, but with Kane it has always been more clear.

He’s a vocational footballer and that’s one of the reasons why the crowd has embraced him. He’s one of their own, yes, but it’s more than that: they appreciate the struggle, they embrace the humanity of it.

Madrid should be perfect. A three-week break has given his ankle ligaments time to heal and, almost certainly, Kane will start the Champions League final. It’s near-impossible to make a case against that, too. Match-fitness is a concern, but then none of Mauricio Pochettino’s squad has played competitively for the best part of a month. Neither Lucas Moura nor Son Heung-min deserve to be left out of the line-up given their contribution, but Kane’s emotional effect on the Tottenham dressing-room is profound and it’s not saccharine or romantic to claim that the side is psychologically stronger when he’s in it.

Amsterdam attested to that. The reality was probably more mundane, but the imagined aesthetics of that night are thrilling: of Kane bursting through the dressing-room door at half-time, scattering the crockery and demanding that his teammates dig deeper and deeper and deeper. And they did.

Kane has to be on the pitch on Saturday night. So much of this era has been about him that, were he not to be, it would feel terribly wrong.

That holds water as a dispassionate argument, too: a half-fit Kane still brings enormous value. At the end of 2017-18 season, when he reappeared after suffering another ankle injury against Bournemouth, he was lumbering and clumsy. He returned to the starting line-up with seven league games to go and a Champions League place to clinch and he contributed very little – other than to score in five of those games, including that dug out, curling winner against Newcastle at Wembley which edged Tottenham over the line.

It’s familiar; it’s what happens. Those who watch Kane every week will tell you that he’s far more than just a goalscorer, defining him instead as the mid-point between the traditional 9 and 10 positions. They’re absolutely right, too, because he has all of those attributes. Until he gets injured.

That’s where the vocational, student-of-the-game aspect of Kane’s rise becomes a handicap. It’s as if, in those months, he has to re-educate himself, redecorating his goalscoring core with the acquired, supplementary abilities which make him so valuable. No player is excused that challenge, but it’s always been such a struggle for Kane and, in those games, save for the goals, it’s almost as if he becomes walled back inside his old, assumed limitations.

And Tottenham suffer. There is no debate to be had about Kane’s worth to the side when he’s healthy, but putting him on the pitch when he’s not is to make him the centre of the side and to ask him to perform a role which, awkward and uncertain in his control and hesitant in his decisions, he’s not really equipped to perform just yet.

When he receives the ball on the touchline at the Wanda and Trent Alexander-Arnold and the rest of the Liverpool defence are drawn towards him, how sure will his setting touch be? How many extra split-seconds will it take to shift the ball out of his feet? Will that diagonal ball javelin across the pitch, inviting Kieran Trippier down a vacant channel, or will it slice and drift back to the halfway line, killing another Spurs move?

It’s such a contradictory scenario: if he plays, nobody can expect him to perform particularly well but, at the same time, nobody in their right mind would bet against him scoring. Pochettino will know that. He’s more aware than anyone of Kane’s magnetism, his intangibles, and how his post-injury form often manifests. His job is to quantify those ratios, to find a compromise between what this version of Kane can give and what it might subtract.

Tottenham’s Champions League campaign has been built from minor miracles and he’s certainly not short of ethereal power. But their progress also owes a debt to doses of lightning quick precision and bursts of startling form and those qualities, for now, are likely beyond Kane’s reach. This evening, in his selection, Pochettino faces a question without a proper answer.