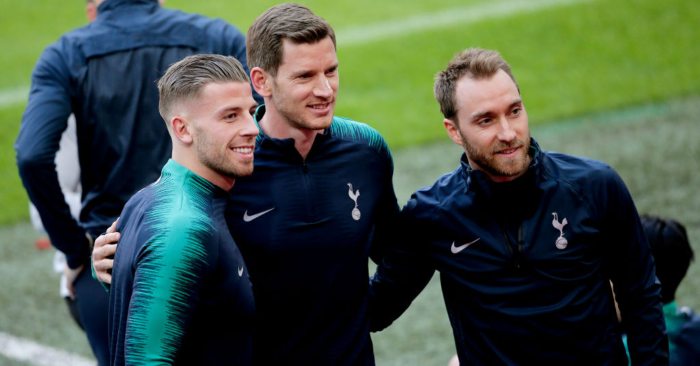 Tottenham head coach Mauricio Pochettino says he will not know whether his side can challenge Manchester City this season until the European transfer window closes.

Spurs are fancied to provide more of a challenge to City, whom they visit in Saturday’s late kick-off, and Liverpool, but uncertainty surrounds several of their key players.

There is a huge question mark over the future of Christian Eriksen, whom Spurs are willing to sell before the September 2 deadline, while Toby Alderweireld and Jan Vertonghen (not even on the bench last week) are also in the final year of their contracts and Danny Rose was told he could leave earlier in the summer.

With clubs on the continent still having another fortnight to conduct any business, Pochettino admits he could be left with “problems”.

With that quartet on the scene, Tottenham look capable of being title contenders this term, having added Tanguy Ndombele, Giovani Lo Celso and Ryan Sessegnon to their squad.

But the picture could look very different on September 3, which is why Pochettino is reluctant to be too bold.

“We need to assess the circumstances,” he said. “We will see what happens between now and September 2.

“Like we can change our minds, a player can change his, so until September 2 it is difficult to tell you if this will be the bravest group of players.

“The team is still not settled how I expected it to be. We are still working in trying to make sure it is finished come September 2.

“That will be the moment to have a big conversation with the whole squad and settle the principle.

“Things can still happen. It is not in my hands if something happens or not.

“Still we need to wait until September 2 and hope there are not too many changes or too many problems for us.”

Spurs have happy recent memories of heading to the Etihad Stadium following their memorable Champions League quarter-final second leg, where, even though they lost the game, they progressed on away goals.

They lost in the Premier League just three days later, though, part of a 15-game winning run for City, who hammered West Ham 5-0 on the opening day of the season.

“It shows how good they are,” Pochettino said. “We know the mentality of Manchester City. To be honest I’m not thinking of that, I am thinking for us to deliver a great show tomorrow.

“But of course 15 games winning is a massive record and it shows the quality of this team and when I talk about the quality I am talking about the CEO, the sporting director, the manager, the players, the structure.

“When I talk about the quality it is not talking about one player, one person. It’s the quality of the project of Manchester City.”

Pochettino and Pep Guardiola have a string rivalry, going back to their days at Espanyol and Barcelona respectively.

The Argentinian has had some success against his counterpart, becoming the first opposition manager to beat Guardiola’s Barcelona at the Nou Camp and the first to beat him in the Premier League back in 2016, while Spurs were also the last side to win against City in any competition – a 1-0 success in the Champions League quarter-final first leg.

Pochettino has played down the rivalry, insisting it is the players who matter, and joked a boxing match should decide who would come out on top.

“I hate, I promise, when you play another team and it is a fight between one person and another when in the competition it is the whole team,” he said. “It is not me with another coach. It is not me and Pep.”

He went on: “For me the best thing to see who is the best is to go there, brave managers, be like Anthony Joshua and create a ring and fight.

“I am so brave on the touchline because I know that is never going to happen, so I shout and everything. That is the point – I love to compare my team with another team. Maybe Tottenham was the last team to beat Manchester City, for sure.”

So, who would win in the ring?

“I don’t know,” Pochettino added. “You can be surprised. People who are so relaxed… He is strong. You don’t know. That is a joke.”