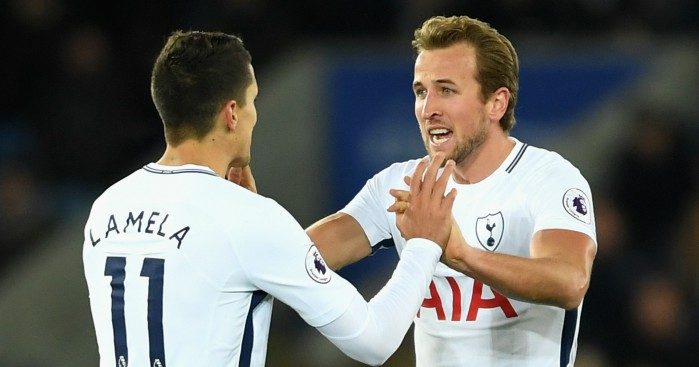 Erik Lamela’s long-awaited return from injury was one of the few positives Tottenham boss Mauricio Pochettino was able to take from the defeat at Leicester.

The Argentinian winger played for the first time in 13 months having undergone operations on each of his hips.

He was introduced as a 77th-minute replacement for Christian Eriksen and made an immediate impact, setting up Harry Kane for Tottenham’s goal in the 2-1 loss on Tuesday night.

While his bright cameo appearance could not spare Spurs a fourth Premier League defeat of the season – as many as they endured during the whole of the last campaign – Lamela’s return does present Pochettino with another option ahead of the hectic festive schedule. And boy do they need options.

“Of course Erik is a player that has different qualities and his quality in the team was very helpful for us and in the future we are going to need him,” said the Spurs manger.

“With him I think in the second half we competed, we fought. And then in the end if the game finished 2-2 or 3-2 to us we would have deserved it.

“But it’s true we weren’t clinical in front of the goal because we had a few chances, easy to score, but it wasn’t to be.”

One such opportunity fell to substitute Fernando Llorente just three minutes after Kane’s goal. The summer signing from Swansea should have equalised but somehow poked Serge Aurier’s driven cross over the crossbar from inside the six-yard box.

Llorente has yet to score for Spurs and Pochettino admits the striker is low on confidence.

“Yes of course, it is about building the confidence of the player and, it is true, the chance was so clear,” he said.

“We feel bad because it was a chance to score for 2-2 and it was so clear. We need to accept that but everything in the last few games is all against us and we need to be calm, trust and work hard for the next game.”

Leicester boss Claude Puel described the performance as the best of his short spell in charge and he is looking for his players to maintain that level when Burnley visit the King Power Stadium at the weekend.

“We were a little frustrated with our game against Stoke and West Ham because we had opportunities to score more and win these games but we continue to work and improve and it is encouraging to play well against a top team and win,” said Puel.

“It was very interesting and promising to see my players play with this quality and solidarity, it is good for the future. Now we play against Burnley, another good team but with a different style, and it is important also to give another good response.”