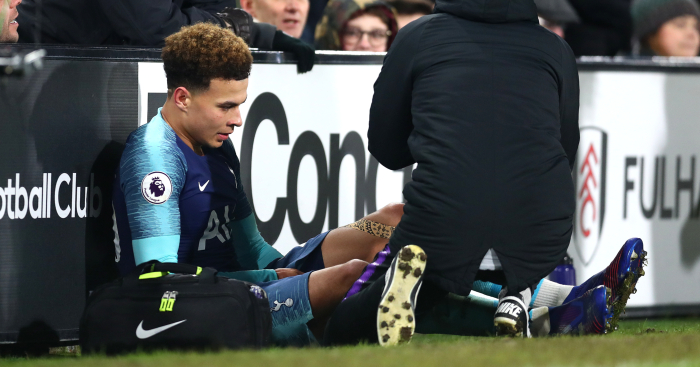 Tottenham manager Mauricio Pochettino is concerned about the hamstring injury Dele Alli picked up in his side’s last-gasp win at Fulham.

Alli, who cancelled out a Fernando Llorente own goal with a header early in the second half, limped out of the game in the final few minutes, clutching his hamstring.

He watched on from the bench as Harry Winks earned Spurs a vital three points with a header deep into time added on at Craven Cottage, but his problem cast a shadow over Tottenham’s victory.

Another injury to an attacking player is the last thing Pochettino needs, given the absence of the injured Harry Kane and Son Heung-min, who is on international duty, over the next few weeks.

It looks highly unlikely that England international Alli, who has already been out twice this season with hamstring problems, will be fit to face Chelsea in the Carabao Cup semi-final second leg at Stamford Bridge on Thursday.

“You know very well the action,” Pochettino said. “We need to assess him in the next few days.

“The hamstring is a muscle we need to be careful with, but it doesn’t look great.

“On the pitch, we all agree that when you see him put his hands on his hamstring you feel…it’s not great.”

Alli’s likely absence is at least off-set by the potential return of Lucas Moura, who has been working at the club’s training ground following a knee injury.

“We’re going to go there expecting to win. Like I told you with Kane, and now with Alli, we hope it’s not a big issue,” Pochettino added.

“We hope Lucas Moura, who was training today at the training ground, is going to be OK.

“Today we didn’t want to take a risk with him, but he’s nearly 100 per cent. Maybe it’s not going to be Dele Alli, but we can have Lucas Moura on the bench or starting at Chelsea.”