Home All The News Pochettino: Lloris injury had ’emotional impact’ on Spurs 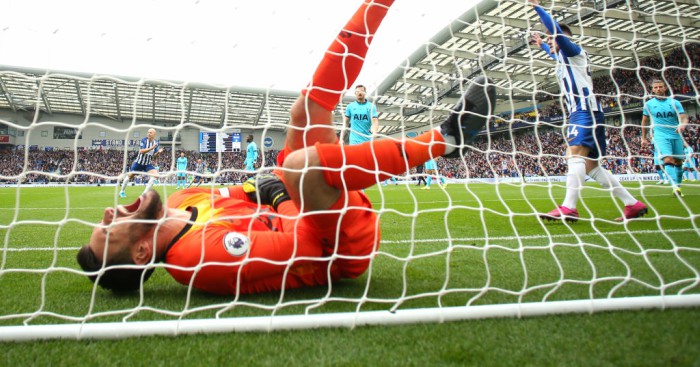 Mauricio Pochettino thinks Hugo Lloris’ horrific arm injury had an “emotional impact” on the Tottenham players in their 3-0 loss to Brighton.

Lloris dropped the ball on the goal line and hurt himself in the process in only the third minute, allowing Neal Maupay to open the scoring, and it only got worse after that as Aaron Connolly’s double gave the impressive Seagulls a deserved three points.

As good as the hosts were, this must go down as one of the worst performances of Pochettino’s reign and, following on from Tuesday’s 7-2 Champions League humiliation to Bayern Munich, the dark clouds are mounting over the club.

Pochettino told BT Sport: “Hugo Lloris’ injury had massive impact on the game. It was so early in the game. To concede so early and losing our captain it had an emotional impact on the team. We tried to find solutions, a different way to play but it was impossible. It’s a very difficult moment.

“I want to say thank you to the fans, it was a big effort to the fans and we put out that performance. We were at the top together but now we need to get more. It is not easy.”

On how to progress: “After five and a half years this is the first tough time we are having. There is a feeling that this is not good at the minute. We are feeling the emotion. I want to keep working hard and believing.

“I hope the pressure is coming to me and leaves the pressure off the players. Now is a moment to be strong. We cannot underestimate the situation but we need to work. There is always the possibility to make us stronger.”

On Hugo Lloris: “He is in the hospital now. There is no other news at the moment.”